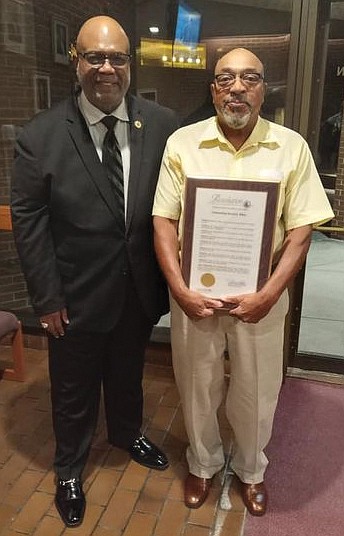 Ronald White, right, holds the resolution he received recently from the Henrico County Board of Supervisors acknowledging his pioneering role as the first Black player on the Highland Springs High School football team. With him is the Rev. Joe Ellison, the team’s chaplain.

When Ronald White first went out for football at Highland Springs High School in 1966, he readily discovered he looked different from everyone else.

With high hopes but with a small stature, the sophomore became the Springers’ first Black football player. He was assigned No. 28 and nicknamed “Whizzer White.”

“I just wanted to play organized football for the first time,” White, now 71, said in a phone interview from his home in Odenton, Md. “Plus, it was much closer to home than taking the bus all the way to Virginia Randolph.”

For his pioneering efforts in shoulder pads, White recently was recognized by the Henrico County Board of Supervisors with a resolution commending his service to the athletic program at Highland Springs.

Prior to full racial integration of Henrico’s public school system, Virginia Randolph, located on Mountain Road in Glen Allen, served as the high school for Black students in the county.

“On the other side of the county, a half hour bus ride to and from every day” said White, explaining his decision to stay closer to home.

Plus, he sent out a feeler to his friends at Virginia Randolph about playing football there and was told, “Dude, you’re too small,” he recalled with a laugh.

White had gone to segregated Fair Oaks Elementary and, until ninth grade, to Fairfield Middle School, which had just begun enrolling Black students.

On the first day of the fall semester, White signed up for Highland Springs varsity football under head Coach Lindy Hill.

It was a culture shock beyond being the only Black player.

“I’d never worn a helmet or shoulder pads; never heard of wrapping ankles or a playbook or wearing cleats,” he said. “It was the first time I’d ever played organized football.”

He estimates he was 5-foot-8 and 140 pounds and admits to having only average speed.

White played little on the varsity team in 1966 but did receive some game time with the Springers’ junior varsity team.

As a junior, he was a backup defensive back.

“I just wasn’t good enough,” he said, declining to accuse anyone of prejudice. He felt the full support of his white teammates and especially the kindness of assistant Coach Buster Lammay.

“It wasn’t paradise, but I have no complaints,” White said.

White’s historic significance of being Highland Springs High’s first Black football player was made public by Springer alumni Joe Ellison and Phillip Kirby in their efforts to publish Springer Spirit Volumes I and II.

Team photos dating back to the 1950s are displayed in the books. They couldn’t help doing a double take at the 1966 team photo showing White sitting on the far right of the front row.

White never scored a touchdown, sacked a quarterback or led the Springers to victory.

Still, No. 28, “Whizzer White,” holds a place in Springers lore. No one can ever do what he did again.