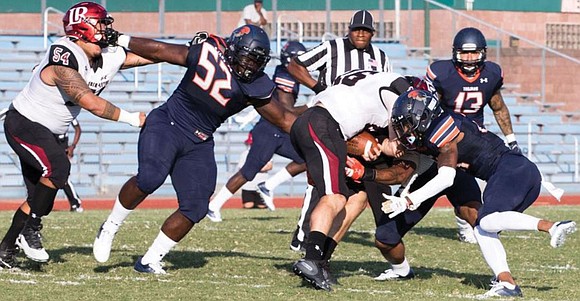 Virginia State University’s returning alumni and friends could be in store for some offensive fireworks this Saturday, Oct. 23, at Rogers Stadium in Ettrick.

The Trojans will celebrate homecoming with a 2 p.m. game against CIAA opponent Lincoln University.

After trailing 21-0, the Trojans figured out the Bowie State defense and attacked and attacked.

VSU running back Darius Hagans rambled for 199 yards on 22 carries. And Caldwell, in what amounted to his VSU coming out party, threw for four touchdowns, including a pair to Marquez Phillips.

Upton Bailey, the exciting freshman from Petersburg, raced 80 yards with a 74-yard touchdown. The previous week, Bailey went 58 yards, with a 28-yard touchdown, on only four totes.

A native of Durham, N.C., Caldwell started eight games for his hometown school, North Carolina Central University, throwing 19 touchdown passes for the Eagles. He played two full seasons at Central before announcing he would transfer after the opening game of his junior year.

Will Adams sparked the Trojans’ defense with seven tackles plus an interception. The Trojans likely have been eliminated from the CIAA Northern Division race, but still hope for a winning season and the chance to finish with a flurry.

Following the homecoming game against Lincoln, VSU will finish with a home date against Chowan University and a trip to Richmond to meet Virginia Union University on Nov. 6. Lincoln comes to Ettrick 1-6 overall but feeling good about last Saturday’s 17-14 homecoming win over Elizabeth City State University.

Based on history, VSU is a prohibitive favorite to add the Lincoln Lions to the win column. Since 2011, VSU is 9-0 against Lincoln with a 36-point average winning margin.