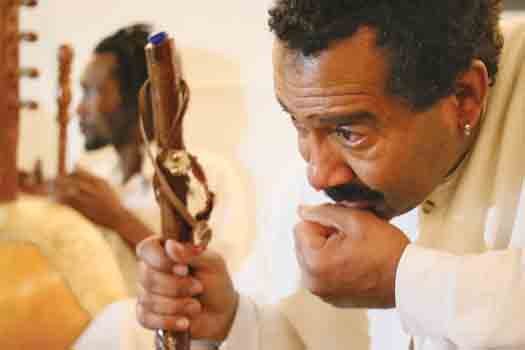 J. Ron Fleming is overcome with emotion during the pouring of libations. Photo by Sandra Sellars

As libations were poured, the names of ancestors were called out. Tears were shed and moans could be heard throughout the audience of about 75 people.

According to the university, the remains were discarded in the 1800s by medical student from the former medical department of Hampden-Sydney College, the precursor to the VCU School of Medicine. The remains were found 20 years ago by construction workers on the site and were unearthed and placed in a pile like rubble. Authorities were given days to pick them up.

“I commit to you today that the legacy of these human beings will not be that they were buried in a well and forgotten. It will be that they inspired us to move forward together,” said VCU President Dr. Michael Rao. “We owe it to them, and to each other, to accelerate the pace of our progress,” he said.

The university created the East Marshall Street Well Project to “facilitate a process with the community that ensures the remains receive appropriate study, memorialization and reburial,” according to statement issued by VCU.

The East Marshall Street Well Project Open House and Ceremony on Nov. 19 was a start on the path. The program featured a musical selection by VCU’s Black Awakening Choir, a procession led by the Elegba Folklore Society from the Kontos Medical Sciences Building to its courtyard. Elegba also poured libations.

VCU also announced plans for a memorial scholarship for students who commit to serving the human health needs of underrepresented communities.