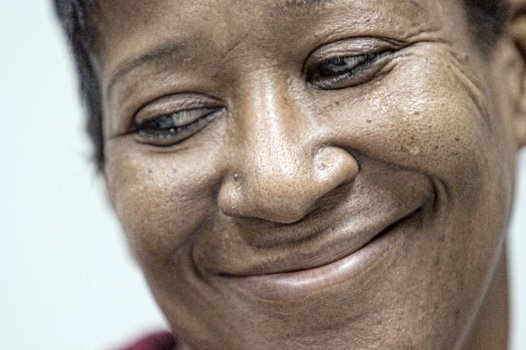 She said a new program called REAL, or Recovering from Everyday Addictive Lifestyle, is being implemented throughout the jail under Sheriff C.T. Woody Jr. to offer a comprehensive approach “to address their addictions and behaviors, while appropriately modifying their thinking.”

“For years, I have seen the same people cycle through the system. There are mothers and sons, brothers, sisters, uncles, aunts and grandparents — all incarcerated at the jail at the same time. Constantly, we have family members who are reunited behind the bars of the jail.”

He said seeing inmates grow comfortable behind bars has sparked his desire to have Ms. Scarbrough and others implement more programs to help the inmates break those institutional cycles.

He cited a renewed focus in the Justice Center on family outreach and integration, educational opportunities, parenting classes, addiction classes, mental health services, faith-based programs and job training as a means to reach those who have earned the title of “career criminal” and providing them opportunities for change.

The focus is on inmates like Ms. Hicks and her son.

“I feel like I’ve been in captivity my whole life,” Mr. Jones said.

They have vowed not to accept imprisonment as a way of life.

Ms. Hicks, 52, has been at the jail since June 24 on her current charges. She has been to the penitentiary six times, estimated she has been in the city jail about 15 times and was in juvenile detention twice. Her latest charges garnered five years, with nearly four suspended.

“I can’t say why I display this behavior,” she said. “I know I have a mental disorder. Maybe I was just born this way.”

She blames most of her crimes on attempts to fuel a heroin habit. She recalls first injecting the drug at a young age. Her mother, she says, would put her to sleep by giving her beer.

Her mother died when she was 12 and her father, who was in and out of prison most of his life, died two years ago.

Ms. Hicks said she deeply regrets not being a better example for her son and not being around to steer him from trouble.

After her release, she said she hopes to enter a drug treatment program to get clean and to become a better mother.

“I want to show the court I’m a changed person,” she said. “I want to live life one day at a time and live the life God has given me. I want to be rich in spirit and help others through my experiences.

“I want to tell my son that I love him so much and want to be a real mother to him.”

Ms. Scarbrough said this time will be different for Ms. Hicks when she re-enters society.

“We will not let this woman go back to where she was,” she said. “We will get her into a very intensive, rigorous” drug treatment program.

Ms. Hicks said she’s grateful she was arrested and credits it for saving her life.

“I was almost dead when I came here because I was on heroin so bad,” she said. “I weighed only 115 pounds when I came in here; now I weigh 150. This has given me another chance at life. It’s been miraculous.”

She said her son telling her she needed help fueled her desire to change because it meant “he still cared about me.”

Mr. Jones, 36, has been held in the city jail since Oct. 31, 2013. He was sentenced to 13 years in prison for robbery and is awaiting transfer to a state prison.

This will be his fourth prison stint. The others are related to convictions for drug possession or sales and assaults and robberies.

He said he had little guidance from his family as a youngster. “Most everyone around me was an alcoholic or did other drugs or sold drugs,” he said.

His mother always getting high or being behind bars “seemed normal to me.”

He said his father was shot and killed when he was 4. He lived with a succession of family members and then in a rotation of foster homes.

“I just make bad decisions because of my environment,” he said.

He wants to turn his life around to avoid becoming like others behind bars who have given up.

“I’m tired of being here. I cry in my dreams. I know I can change if I get the help I need.”

Ms. Scarbrough said in the two months she has known Mr. Jones, he has been a model inmate and mentors younger men.

He also has aided her efforts to implement a “culture of accountability and compliance” at the Justice Center, she said.

“He has really done well and I’m very proud of him,” she said.