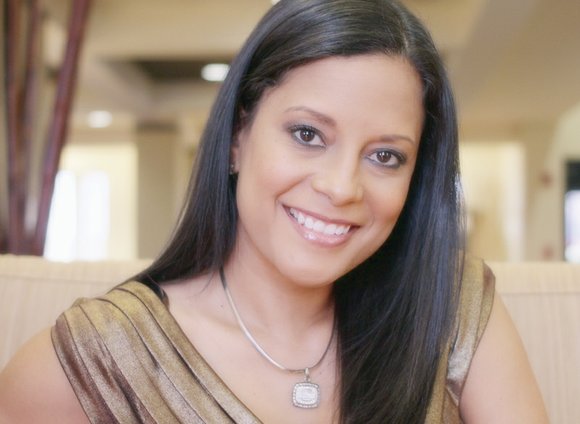 Lisa Nicole Cloud of the Bravo reality TV show “Married to Medicine” started her own clothing line and a nonprofit to help women pursue their passions. Photo by Sandra Sellars

Reality TV is a breeding ground for drama and squabbles. But one star, Lisa Nicole Cloud of Bravo’s “Married to Medicine,” is focused on being positive.

“I wanted to see a different portrayal of African-American women on TV,” said Ms. Cloud, an entrepreneur and cast member on the Atlanta-based reality show about the lives of women doctors and women married to doctors.

Ms. Cloud talked with the Free Press during her recent trip to Richmond, where she was a keynote speaker at a business conference.

Women in reality TV are often portrayed as brand-obsessed drama queens. But Ms. Cloud said she focuses on being a role model for other women on the show, which is not easy in an industry where rating spikes correspond to melodrama.

On “Married to Medicine’s” third season, which will air this summer, Ms. Cloud said one of her cast members pulled her into the fray by spreading lies about her family.

Ms. Cloud, who lives in a suburb of Atlanta with her husband Dr. Darren Naugles, an emergency medicine physician, and their two children, D.J., 10, and Amira, 7, said her family is off limits to the drama of the show.

“You have to have a strong relationship when you do reality TV,” Ms. Cloud said about her marriage. Others “will find your weakness and exploit it.”

When the new season airs in June, she said audiences will find out about how cast member Quad Webb-Lunceford “got some reaction from me.”

Internet chatter indicates that the two get into an argument during which Ms. Cloud throws a glass of water in Ms. Webb-Lunceford’s face. The altercation also allegedly results in a hospital visit and the filing of a police report.

Ms. Cloud, who turned down an opportunity to be a part of Bravo’s “Real Housewives of Atlanta,” said she agreed to do this show to promote values of hard work, family and God.

Ms. Cloud has been in the direct sales business for more than a decade. Her passion now is teaching other people to start their own business in direct sales.

She said many people don’t have the money to start a traditional business and the direct sales industry doesn’t require a big startup cost. She wants to dispel the image of the direct sales business as a pyramid scheme by teaching people to discern the good companies from the bad ones.

The show follows her as she runs her businesses, which include her own clothing line and a nonprofit organization, Women’s Empowerment Network, that gives women tools and the professional network to pursue their passions.

Ms. Cloud also is working to develop her own shows about her family and the direct sales business.

“What is another way you can change the content on TV? Produce the content,” Ms. Cloud said.

More importantly, she said, she wants creative control of her own show to be true to who she is and not cave to the “pressures of whatever people want to see.”

Ms. Cloud credits her mother for her industrious business sense. Growing up in Baltimore, she watched her mother succeed — and sometimes fail — at her business projects.

When Ms. Cloud attended Emory University in Atlanta, she worked full time as a bank manager at MBNA. She maintained good grades to participate in a tuition reimbursement program through the bank.

She then worked for a health care company in Atlanta and later met her husband working in the pharmaceutical sales business in the Washington, D.C., area.

Ms. Cloud said despite her husband’s achievements, he doesn’t get wrapped up in the prestige of his profession.

The two also will be working together on Fashion for a Cause, she said, a charity event slated for May that raises money through fashion shows and partners with the nonprofit organization MedShare to send medical supplies and doctors to Haiti.

She jokes that she has the unconventional role of being the breadwinner in the family because of her business success. And she wants to continue to build new business ventures with her husband to “build a legacy for my family.”

“We’re young and aggressive and we have a lot of gifts,” Ms. Cloud.