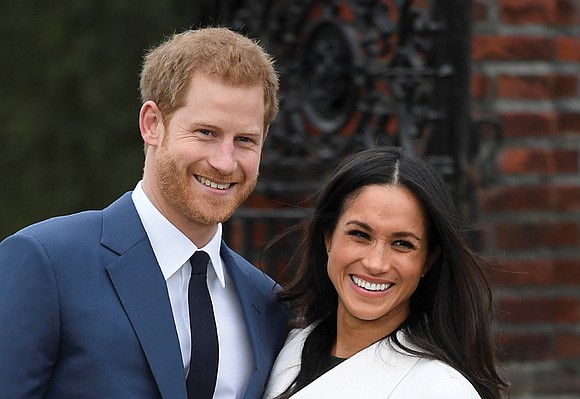 It looks like a fairy tale ending for Meghan Markle, the American actress best known for her role in the television legal drama “Suits.”

Ms. Markle and Britain’s Prince Harry announced on Monday they are getting married next year, saying their relationship had blossomed “incredibly quickly” after meeting on a blind date.

Asked when he knew Ms. Markle was “the one,” he replied: “The very first time we met.”

Prince Harry, 33, Queen Elizabeth’s grandson and fifth in line to the British throne, and Ms. Markle, 36, got engaged in London this month and will wed in May at Windsor Palace.

Ms. Markle will become a dual citizen, adding British citizenship to her U.S. citizenship, according to officials.

“The fact that I fell in love with Meghan so incredibly quickly was confirmation to me that all the stars were aligned, everything was just perfect. This beautiful woman just tripped and fell into my life, I fell into her life,” Prince Harry said during the couple’s first broadcast interview.

The queen, who had to give her consent for the union, and her husband Prince Philip were delighted, Buckingham Palace said, while Prince Harry also received the blessing of Ms. Markle’s parents.

“We’re thrilled. I hope they will be very happy indeed,” Prince Charles, the father of the newly betrothed and heir to the British throne, said.

Prince Harry and Ms. Markle, a divorcée, met in July 2016 after they were introduced through a mutual friend, with both knowing little about the other.

“I had never watched ‘Suits,’ I had never heard of Meghan before and I was beautifully surprised when I walked into that room and saw her. I was like I‘m going to really up my game here,” Prince Harry said.

After just two dates, the couple decided to go on holiday together to Botswana, but it was only months later that the prince, the younger son of Charles and his first wife Princess Diana, publicly confirmed their relationship in a rebuke to the media over its alleged intrusion into Ms. Markle’s private life.

“I did not have any understanding of just what it would be like,” she said. “Both of us were totally surprised by the reaction,” added Prince Harry, who said they had a frank conversation about what she was letting herself in for.

In his office’s warning to the media, Prince Harry referred to the sexism and racism directed at Ms. Markle, whose father is white and her mother, African-American.

“We are incredibly happy for Meghan and Harry. Our daughter has always been a kind and loving person,” Ms. Markle’s parents, Thomas Markle and Doria Ragland, said in a statement.

“To see her union with Harry, who shares the same qualities, is a source of great joy for us as parents. We wish them a lifetime of happiness and are very excited for their future together.”

It was not until September that the couple made their first public appearance together at the Invictus Games in Toronto, a sports event for wounded veterans.

The couple posed for photographs earlier Monday on the grounds of Kensington Palace in central London, where the couple will live in a cottage.

Ms. Markle showed off a dazzling three-stone ring designed by Prince Harry. At its center is a diamond from Botswana, surrounded by two diamonds taken from the personal collection of his late mother, Princess Diana. Prince Harry said she would have been “thick as thieves” with Ms. Markle.

“It’s so important to me to know that she’s a part of this with us,” Ms. Markle said.

The wedding is likely to attract huge attention across the world, as did the marriage of Prince Harry’s elder brother, Prince William, to Kate Middleton in 2011.

“We are very excited for Harry and Meghan,” Prince William and Kate said in a statement. “It has been wonderful getting to know Meghan and to see how happy she and Harry are together.”

Like Prince William’s wife, Ms. Markle will not become a princess in her own right after marrying Prince Harry. However, like his brother, Prince Harry is likely to be made a duke when he marries, meaning Ms. Markle would become a duchess.

Ms. Markle was born in Los Angeles in 1981. Her father was a TV lighting director for soaps and sitcoms and her mother a clinical therapist.

She made her first TV appearance in a 2002 episode of the soap opera “General Hospital” and has appeared in a number of TV shows and films, such as “Horrible Bosses.” But she achieved her greatest fame for her starring part as Rachel Zane in the TV series “Suits.”

In 2011, Ms. Markle married film producer Trevor Engelson, but they divorced two years later. She had her own lifestyle blog, thetig.com, which she recently shut down. Like her future husband, she has become a humanitarian campaigner.

Prince Harry’s easygoing manner with the public has made him one of the most popular members of the Windsors. That has put him at the forefront of a rebranding of the monarchy as modern and relevant, a far cry from the perception of a hopelessly out-of-touch institution following Princess Diana’s death.

To coincide with the 20th anniversary of her death this year, Prince Harry opened up about his own trauma at losing his mother at a young age.

Britain’s royals traditionally avoid making any political interventions and Prince Harry said he had confidence that his wife-to-be would be able to handle the pressures her role would bring.

“I know the fact that she’ll be unbelievably good at the job part as well is obviously a huge relief to me because she’ll be able to deal with everything else that comes with it,” he said. “We’re a fantastic team. We know we are.”