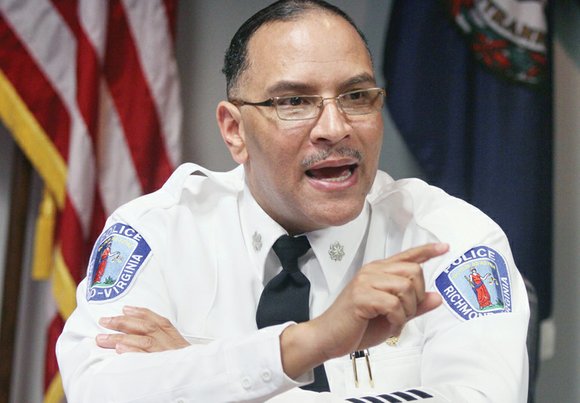 Richmond Police Chief Alfred Durham minced no words about how he won’t tolerate brutality and excessive use of force by officers under his command.

“I’m going to tell it like it is. If there is riffraff in my department and you’re wearing a gun and a badge, you’re gone,” he told an audience of about 50 people at a public forum Tuesday night at Richmond’s Martin Luther King Jr. Middle School. “I will not tolerate it.”

At this second “Peeps and Police Community Conversations” attended by mostly elderly and middle-aged adults, Chief Durham said that “several officers were disciplined” recently after they mishandled a situation inside a resident’s home.

He did not elaborate.

In response to Free Press inquiries on Wednesday, department spokesperson Gene Lepley said no information would be provided about the incident and the disciplinary actions because of city regulations.

“The investigation did reveal departmental policy violations, and we will take the appropriate measures, whether disciplinary or corrective, to ensure these violations are appropriately addressed,” Mr. Lepley said.

Chief Durham acknowledged the issue of police misconduct as “a touchy subject all across the country,” after the recent killing of unarmed black men by white police officers in Ferguson, Mo., New York City, Cleveland, Ohio, and other cities.

The “Peeps and Police” town hall-style meetings began in Richmond in February in response to local “Black Lives Matter” demonstrations over concerns about police brutality and conduct.

To help prevent incidents of police brutality, Chief Durham said nearly all of Richmond’s 700-plus officers have completed training in fair and impartial policing.

He said officers also undergo use of force training twice a year.

Chief Durham said he knew of several recent incidents in Richmond in which officers were shot at by suspects, but did not return gunfire.

In one, he said, the officer did not return fire because he saw people standing in the background behind the shooter.

“But sometimes you have to resort to lethal force if you feel your life is being threatened,” he added.

On Wednesday morning, a Richmond Police officer shot a man who allegedly pointed a gun at him during a foot pursuit near the 6300 block of Midlothian Turnpike.

According to Chief Durham, officers were attempting to question the 29-year-old man who allegedly was involved in a “hand-to-hand” exchange in an area known to police for drug crimes.

The police department is investigating the shooting, along with the Richmond Commonwealth’s Attorney’s Office. Officers involved have been placed on administrative leave pending the investigation’s outcome, the chief said.

The man was taken to the hospital for surgery and is expected to recover.

Marvin Robinson Jr., 22, who works with the Boys & Girls Clubs of Metro Richmond, said many African-Americans, particularly young black men, no longer trust law enforcement in the wake of the highly publicized police killings around the nation.

“You have to gain that trust back,” he told the police panel that included Sgt. Richard Edwards, Detective Christopher Miller and Officers LaTasha Miller and Jerome Andrzejczak.

“You have to have conversations with (community members) and let them know you are a human being, just like they are,” he said.

Chief Durham responded that he has made youth engagement a part of his 100-day plan to kick off his new administration. He lamented that few young people have been present at the 14 various community meetings he has participated in since beginning his job Feb. 20.

“We have to find a way to reach more young people,” he declared.

From the dozen or so questions from audience members, the panel and other officers in attendance discussed 911 response times, their efforts to enforce youth curfew laws and to stem drug dealing in crime-plagued communities, as well as efforts to quell domestic violence incidents.

“Why are so many children off the chain?” one audience member asked.

“Because parents let them be off the chain. There is a perception among some that police officers should raise their kids for them. We need the entire community to be involved to address these issues.”

He encouraged community members to cooperate when stopped by the police and to report criminal activities, as well as any incidents of police misconduct.

“We listen, we learn, then we react,” the chief said.

“Our gang is bigger than their gang,” he said of combating crime.