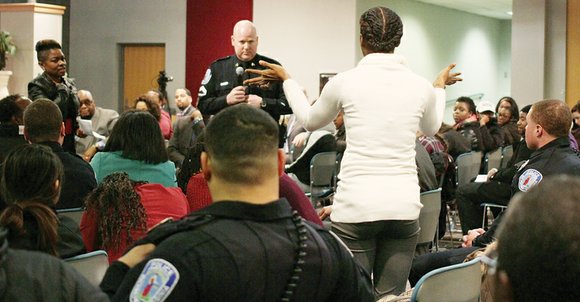 Richmond residents clashed Tuesday at a community forum on whether they believe the city has a policing problem.

Several older residents viewed the Richmond Police Department as a benevolent force. They questioned whether a local discussion about police misconduct and brutality is necessary, even as young people have taken to the streets to protest discriminatory police practices across the country.

“This is 2015,” said longtime Richmond resident Carrie Cox at the community gathering dubbed the “Peeps and Police Community Conversations,” held at the Richmond Police Training Academy. “We have the best department in the world.”

Her sentiments were echoed by Torey Edmonds, who works at Virginia Commonwealth University’s Clark-Hill Institute for Positive Youth Development. She said police misconduct in Richmond is an issue of the past. She said that protesters are “putting on a shoe that just ain’t fitting right now.” She also asked why the community is talking about policing issues plaguing other cities, such as Ferguson, Mo., and New York City.

But several younger people in the audience of about 150 said the event lacked the perspectives of those most vulnerable to police misconduct. Several who spoke emphasized that racial inequality still exists in the criminal justice system.

“Stop being myopic,” said Montigue Magruder, who asserted that beliefs that police-community relations are satisfactory are not representative of the community.

He said inequality is less visible, but still exists.

“It’s just buried,” he said. The forum was organized by community members and the Richmond Police Department. It was held after hundreds of local activists and students staged numerous marches, protests and “die-ins” as a part of the national Black Lives Matter movement to bring attention to racial inequality, especially in the criminal justice system.They also are protesting numerous killings of unarmed black men by white police officers around the nation.

During the 90-minute meeting, which was moderated by local radio personality “Miss Community” Clovia Lawrence, community members raised the issues of police misconduct during arrests, recording police activity, filing complaints against the police and the cultural barriers between some police officers and community members.

Police officers, who were seated among the residents, responded that citizens can videotape police officers as long as they do not interfere with the officers’ work. Repeatedly, they said people may contact the department’s internal affairs office with any complaints or concerns about an officer’s behavior.

Attalah Ali Shabazz, a VCU student and one of the forum’s organizers, said outside the meeting room that the differing opinions on the policing problems come from a difference in experience between older and younger generations. Racism is not as blatant as it was in the 1980s and 1990s, but “that doesn’t mean it doesn’t exist.”

Major questions rose and disagreement erupted on how residents and police should behave during an arrest.

Evandra Catherine, who works at VCU, asked if cultural differences, such as her normal animated hand gestures, would be misunderstood by police as aggression during an arrest.

A police officer responded that the time to complain about an unfair or mishandled arrest is not during the arrest, but rather with the department after the fact.

Some community members stressed the importance of showing respect to the police, particularly during an arrest. They said individuals who are respectful and compliant would be treated well by the police.

But others argued that it’s unfair to put the onus of good behavior on the citizen instead of the police, particularly considering the police are trained and the citizens are not.

Deputy Chief Alfred Durham, who will take over as Richmond’s police chief Friday, Feb. 20, emphasized the importance of honest community feedback during the meeting.

He said afterward that he and community organizers will set up another meeting to continue the conversation.