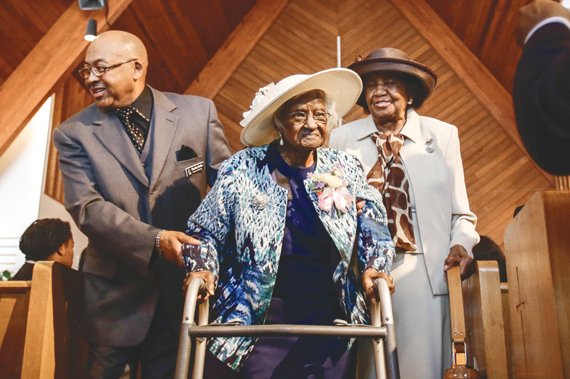 Jeralean Talley, center, is escorted into New Jerusalem Baptist Church in Inkster, Mich., by Deacon Charles Smith and church charter member Willa Williams during a reception in her honor on May 25, 2014. Mrs. Talley had just turned 115 on May 23. Jarrad Henderson

The front door flew open as a reporter approached a brick ranch house in suburban Detroit, Mich., and a voice called out, “C’mon in — I’ve got Time magazine on the phone.”

The speaker stood last week over Jeralean Talley, a placid figure dressed in a pale pink nightgown. Mrs. Talley, a bright-eyed elderly woman in spectacles who, despite her profound hearing loss, was fully aware, relatives said, that she’d just been declared by gerontology experts to be the oldest person in the world.

Mrs. Weaver, who was born July 4, 1898, to sharecroppers near the Texas border, was also the oldest American. She died at 10:12 a.m. at the Silver Oaks Health and Rehabilitation in Camden, Ark., a spokeswoman told KTHV-TV in Little Rock.

She was crowned the oldest on April 1, after the death of Misao Okawa in Japan. She was 117.

“It’s truly incredible because Mrs. Talley is very aware of what’s going on. Her mental state is very sharp,” said Michael Kinloch, 56, a GM engineer and longtime family friend of Mrs. Talley’s through their church.

“It’s unfortunate that other people passed away, but this has certainly elevated her. She’s feeling no pain. She just can’t get around like she used to,” Mr. Kinloch said, who sat on a couch as he gestured to the walker that stood before Mrs. Talley’s easy chair.

At Mrs. Talley’s Inkster, Mich., home this week, a religious tapestry hung on the wall and around the room were other signs of her devotion to God. Asked for the key to her longevity, she gave the answer she has given before:

“It’s coming from above. That’s the best advice I can give you. It’s not in my hands or your hands,” she said, pointing vigorously skyward with both index fingers.

Her advice to the world on the occasion of having attained a new level of celebrity was a rephrasing of the Golden Rule: “I ain’t got nothing more but to treat the other fellow like you want to be treated. You don’t tell a lie on me so I won’t tell a lie on you.”

Mrs. Talley is widely known among experts who chart those who monitor the members of a rare worldwide club — the one in 5 million humans to live at least 110 years. She bowled until she was 104 and still mowed her lawn until a few years ago, according to previous newspaper reports. Equally amazing, Mrs. Talley lived alone until seven years ago, when she was joined in the small home under the flight path of Detroit Metro Airport jets by her daughter, Thelma Holloway, 77, Mrs. Holloway’s daughter, 26, and little Armmell, now 2 and a frequent visitor to his great-great-grandmother’s lap.

On this night, Armmell showed Mrs. Talley his child-sized computer.

“He’s fifth-generation,” Thelma Holloway said, as the two bent over the toy together.

“We go to a trout pond in Dexter. She really likes that,” he said.