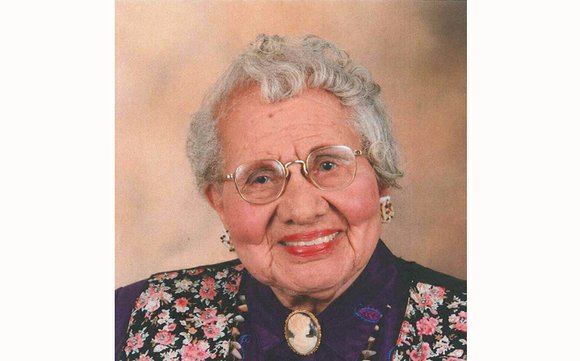 For more than a century — 105 years to be exact — Lettie Coleman Madison used her vast reservoir of talents and experiences to help transform the lives of others.

The daughter of a sharecropper and granddaughter of freed slaves, she left no stone unturned while seeking to help others.

She was a lifelong advocate for human rights as a social worker, college professor, author, philanthropist, church member and, later, as a retiree.

“I have been able to turn many of the stumbling blocks I faced into stepping stones,” Mrs. Madison wrote in 2004 correspondence to the Free Press. “I tried to develop those talents with which God has endowed me.”

Among her proudest accomplishments: She developed Virginia Union University’s Department of Social Work from a single course to a department with full accreditation after she joined the faculty in 1965.

Her life will be celebrated at a memorial service 11 a.m. Friday, June 5, at Ebenezer Baptist Church, 216 W. Leigh St., in Jackson Ward.

One of her students at VUU was Mayor Dwight C. Jones, whom she taught sociology.

When Mayor Jones once considered leaving Richmond to take a ministerial position in New Jersey, Mrs. Madison told him he should stay in Richmond because he had a bright future here.

“I loved her very much,” Mayor Jones reflected on Monday. “She was an erudite and a class act.

“She was a part of the wonderful cadre of excellent role models in Virginia Union’s faculty that took an intimate interest in students and in students’ lives,” the mayor added. “And she took a special liking to me. I think one reason is that we were both from the North. She had lived in Montclair, N.J., and I was from Philadelphia.”

Mrs. Madison retired from Virginia Union in 1977, but continued her lifelong mission to help others in the community for nearly four more decades.

In 2000, Mrs. Madison was honored with a Lifetime Achievement Award by the National Association of Social Workers.

Even in her twilight years, she was a beacon of hope and inspiration to others, particularly in spotlighting the achievements of the African-American community.

Mrs. Madison started a black history symposium at Westminster Canterbury Richmond, a retirement community on North Side where she lived for more than 25 years. It later was named the Lettie Madison Black History Month Symposium in her honor and continues today.

“I was so impressed with her,” Judge Gregory said. “She was a woman with such a long and illustrious career who continued to inform and inspire a multicultural audience that could appreciate the power and promise of so many heroes and heroines.”

She joined the Bethany Baptist Church in Montpelier at an early age and was teaching Sunday School at age 12.

Her early education in public schools took her to Bethany School in Hanover and later Virginia Randolph in Henrico County. She graduated from Hampton Academy at Hampton Institute (now University) in 1929. She was the first member of her family to graduate from high school.

Mrs. Madison studied social work at Rutgers University beginning in 1930. She worked full time in social work while attending college. She graduated from Rutgers with honors in 1934.

In 1940, she married Thomas D. Madison, formerly of Lynchburg. They were married for 25 years until his death in 1965. They raised his daughter, the late Ione Madison.

Mrs. Madison earned a master’s degree in sociology in 1949 from Fordham University despite the degrading experiences she endured because of racism. In 1969, she recorded her experiences in her first of four books, “The Black Social Worker.”

Mrs. Madison’s first social work position was with the Department of Public Welfare in 1934 in Montclair. She went on to become director of freshmen women at Hampton Institute and adjunct professor of social work at Rutgers.

In 1952, Mrs. Madison joined the staff at Essex County Mental Hygiene Clinics in Montclair, where she served as a psychiatric social worker supervisor until 1965.

She also was a member of the National Association of Deans of Women, the Council on Social Work Education, the Virginia Social Science Association and the American Association of University Professors.

She belonged to Ebenezer Baptist Church, the Treble Clef and Book Lovers Club, the Caucus and Center on Black Aged, the Council on Black Social Welfare and the State Library. She received numerous accolades for her service on boards and for decades of contributions to social work.

She wrote three other books: “Profiles in Upward Mobility: A Study in the Black Family,” “A Soul Looks Back” and “Step by Step.” The last two books were written by Mrs. Madison in the final years of her life and reflected on her experiences.

“She was a great person. She never stopped striving,” said the Rev. Cleveland Mallory, associate minister at Shady Grove Baptist Church in Gum Spring, who described himself as her “foster grandson.”

She continued to give to others even in her death. She donated her body to the State Anatomical Program of the Virginia Department of Health for research.

Mrs. Madison is survived by a stepgranddaughter, stepgrandson and a host of other family and friends.