Broadway returns to Richmond this fall 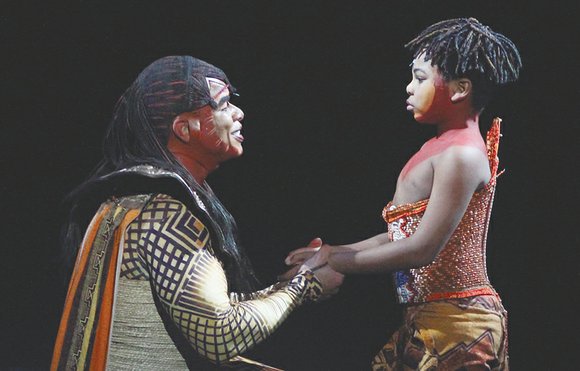 Characters Mustafa, played by Dionne Randolph, and Young Simba, played by Zavion J. Hill, share a moment in the 2012 production of “Disney’s The Lion King” in Richmond. The musical will return for the 2015-16 season of “Broadway in Richmond” at the Altria Theater. 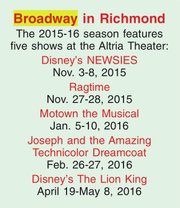 The Grand Ballroom of Richmond’s Altria Theater was turned into a mini musical last week with a preview of the 2015-16 “Broadway in Richmond” season.

About 100 subscribers to the series and media representatives were treated to lively performances by talented cast members from three of the five upcoming shows that will run from November through May at the Altria Theater.

The performances had the audience dancing in their seats.

The preview party started with a stunning rendition of “Circle of Life,” the signature song from “Disney’s The Lion King,” sung by actress Tshidi Manye. Dressed in a red party dress and her hair in braided twists, she moved the audience with her cover of the award-winning song by Elton John.

Ryan Shaw and Syndee Winters from “Motown the Musical,” got the audience pumping with their versions of “Dancing in the Street” by Martha and the Vandellas, “You’re All I Need to Get By” by Marvin Gaye and Tammi Terrell, and Stevie Wonder’s “Sign, Sealed, Delivered.”

Mr. Shaw, dressed in a black tuxedo, plays Stevie Wonder, the Four Tops’ Levi Stubbs and one of Gladys Knight’s Pips in the show. Syndee Winters, who joined the cast in 2013, shimmied across the stage in a sparkling mini dress. The duo blew the audience away.

The preview ended with a performance by Adam Kaplan, a cast member from “Disney’s NEWSIES.” The Broadway production received Tony awards in 2012 for Best Score and Best Choreography. It will open the “Broadway in Richmond” season Nov. 3.