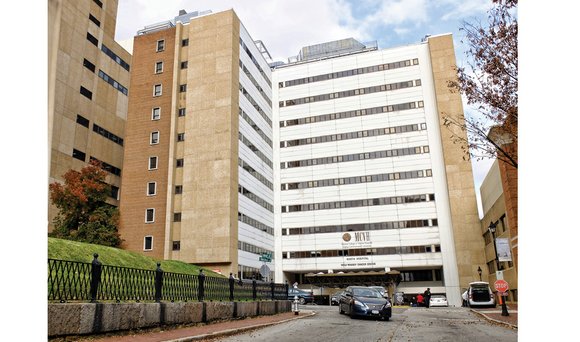 View of the North Hospital at 1300 E. Marshall St. on the medical the campus of Virginia Commonwealth University. VCU is now making plans to replace the building, previously known as the E.G. Williams Hospital, that dates to the mid-1950s. This move is revving up the school’s plans to develop an inpatient hospital for children. Photo by Sandra Sellars

After rebuffing a private group’s concept of an independent, freestanding hospital on the Boulevard, VCU is moving to create a plan for a dedicated hospital for children on its medical campus in Downtown.

Within 60 to 90 days, VCU expects to unveil an updated facilities plan for the medical campus that would include a proposed hospital for children to complement the expensive children’s outpatient pavilion now under construction at 10th and Broad streets next to City Hall.

The VCU effort is gaining momentum following the collapse of plans by the Virginia Children’s Hospital Alliance to create a new hospital separate from the existing ones operated by Richmond’s three major hospital systems, HCA, Bon Secours and VCU Health, the medical arm of the university.

“We have heard the community concerns about fragmented pediatric services and the need to pull them together,” said Pam Lepley, VCU spokeswoman. The goal, she said, would be for the new hospital to address such problems and improve cooperation with the pediatric operations of the two other hospital systems.

Among other things, a new hospital would consolidate services spread over at least three buildings on the VCU campus. Currently, the Children’s Hospital of Richmond at VCU has inpatient beds in the Main Hospital and at its Brook Road campus, where children needing long-term rehabilitation are placed.

Ms. Lepley said questions about the size, scope, price tag, location and timetable for the hospital would not be answered until the new plan is unveiled. But she indicated that the proposal would not sit on the shelf. It has previously taken VCU four to five years to secure approvals for and to design and build a new hospital.

According to Dr. Bruce K. Rubin, who heads the VCU Pediatric Department and is physician-in-chief for the Children’s Hospital of Richmond at VCU, such a hospital would “leverage the research and educational facilities” on the medical campus while providing “world-class care for young patients.”

Besides the 42 beds in the nursery for newborns, he said that 175 inpatient beds in a modern facility “would be adequate.”

Ms. Lepley said the plan being developed also would tie in modern clinical space for children and adult patients of the Massey Cancer Center and Pauley Heart Center.

She said that the children’s hospital proposal has moved to the front burner as a result of VCU’s plans to replace its North Hospital, once known as the E.G. Williams Hospital. She said VCU’s board voted last month to make that a priority.

The North Hospital, at 1300 E. Marshall St., sits east of the Main Hospital and is linked into the headquarters of the Massey Cancer Center. The building’s 10 floors are home to inpatient and outpatient services, including VCU’s bone marrow transplant operations, the adult psychiatry program, brain injury rehabilitation services, the Virginia Center for Digestive Health and the clinical operations of the Massey Cancer Center.

Ms. Lepley said that before VCU could tear down and replace that building, the operations in the building would need to be moved temporarily or permanently to other space.

That, she said, opens the door for the new children’s hospital, which might have to be built first to provide space in the Main Hospital for some of the current North Hospital programs.