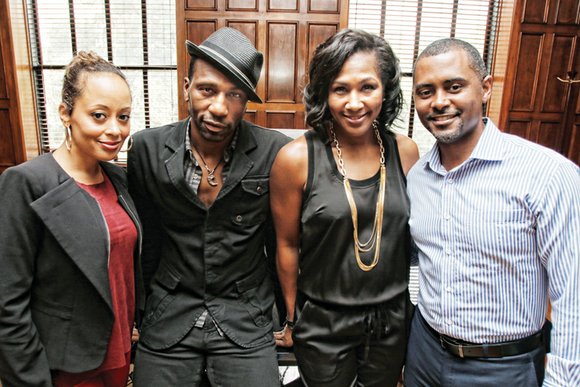 RESCHEDULED Because of the threat of inclement weather, the play “Things Your Man Won’t Do” has been rescheduled to 3 p.m. Sunday, Oct. 11, at the Altria Theater. For more details: www.altriatheater.com

Make no mistake about it — Je’Caryous Johnson is trying to reach you.

The award-winning writer, director and producer’s latest play, “Things Your Man Won’t Do,” features a potent cast of familiar faces whose characters delicately weave drama, humor and the salaciousness of a love triangle against a backstory with a much stronger social message.

“It’s a call to action,” says Mr. Johnson, who uses — of all places — Ferguson, Mo., at the time of the Michael Brown shooting as the setting for this play.

“It’s also about our responsibility as human beings, particularly how we portray ourselves as black men, and it’s about second chances.”

Mr. Johnson and several members of the cast came to the Free Press offices in Downtown, where they talked about the production that’s taking place 3 p.m. Sunday, Oct. 4, at the Altria Theater.

The cast includes Essence Atkins, who gained fame in the film “Deliver Us From Eva” and the television show “Half & Half”; Terri J. Vaughn, who played the popular Lovita Alizae Jenkins on “The Steve Harvey Show;” Allen Payne, best known for the role G-Money in “New Jack City”; Tony Grant, who stars on OWN’s comedy “Love Thy Neighbor”; and Leon, whose unforgettable portrayal of David Ruffin stole the show in the 1998 biopic, “The Temptations.”

“Things Your Man Won’t Do” details the life and loves of Rachel Braxton (Ms. Atkins), a woman considered by most men as the perfect woman. However, Rachel is dismayed by the fact that her live-in boyfriend, Demetrius McAlister (Mr. Payne) is hesitant to take their relationship to the next level. Soon, the relationship is challenged when a former love re-enters her life (Leon) and Rachel has to decide whether to stay the course or to revisit her past.

Mr. Johnson, a 2007 NAACP Trailblazer Award winner, wants the audience to embrace the plays message along with its art form — urban theater.

The 37-year-old playwright denounces the characterization of urban theater as second-rate entertainment or its association with the old “chitlin’ circuit” productions. He admits that the church-spawned theater of the past was limited by low budgets and inexperienced actors, but affirms that the modern incarnation is noticeably upgraded and on par with mainstream Broadway productions.

Unlike mainstream theater, Mr. Johnson believes that urban productions tell the unique stories of African-American people and, most importantly, are told in their voice.

His perspective and passion are shared by the show’s actors.

“I’m drawn to voices that need to be heard — no matter the stage,” says Ms. Vaughn. “When I pick up a script, it is like a ministry and I am challenged to inspire and motivate.”

Even with his cinematic success, Leon views performing in urban productions as a privilege and not as a professional last resort.

“My training as an actor began on stage, so for me it’s like going home,” says Leon, who starred in “The Five Heartbeats” and the stage adaptation of Eric Jerome Dickey’s novel “Friends and Lovers.”

When asked about the limited opportunities for African-American actors alluded to by Viola Davis in her recent Emmy-win speech, the group was one accord with Mr. Johnson.

“This is our opportunity,” he said.