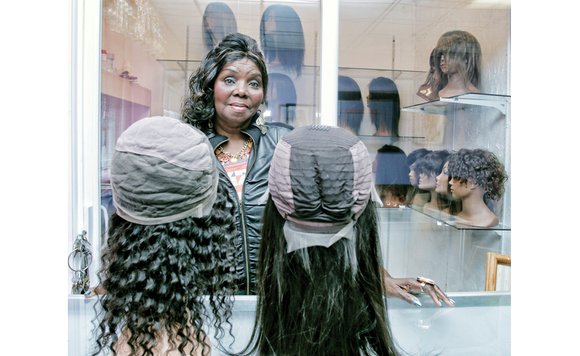 Mary J. Harris wants women to know the difference in wigs so they won’t get taken. At left is a wig with a full-lace base. At right is a wig with a lace-front base, or lace on just a small portion. Photo by Sandra Sellars

Unsuspecting women are being ripped off when it comes to buying wigs.

They are being induced to pay higher prices for cheaper wigs that are falsely labeled as being a more expensive product.

She is blowing the whistle after finding that the expensive wig she thought she was buying at a South Side wig shop turned out to be a lower quality product after it was removed from the box.

Still furious about the deception, she is going public to try to keep other women from being deceived the way she was.

“I don’t think most women are aware,” she said.

The Free Press has confirmed her claims that area wig stores are selling falsely labeled wigs that local retailers have received from manufacturers in China.

So far, state and federal consumer protection agencies have yet to investigate, even though wigs are a big business. Annual retail sales top $2 billion in the United States.

Millions of Americans buy wigs, with the largest group being African-American women, according to Mintel Group, a global marketing research firm. Some use wigs for a change of hairstyle, but others depend on wigs because they suffer from alopecia, cancer or other diseases and conditions that cause their hair to thin or fall out.

What is happening? Essentially, lace-front wigs made with human hair are being labeled as full-lace wigs, a higher-quality and more expensive product. As Ms. Harris found, the label change can add as much as $100 to $300 to the retail price, and wigs mostly cannot be returned.

The Free Press found that one wig shop owner had handwritten “full-lace wig” on the printed label for a lace-front product. In another store, a saleswoman responded to requests to be shown full-lace wigs by pointing to a line of wigs that had only lace fronts.

Several other stores claimed to have full-lace wigs, but did not have any on display.

What’s the difference in the two types of wigs? The amount of lace in the wig’s base, which fits over a person’s hair and scalp.

Cheaper lace-front wigs have lace sewn into a small portion of the wig, according to Joyce Bond, a Richmond hairstylist with 30 years of experience in non-surgical hair replacement, including wigs.

In such wigs, the lace, a mainstay of wig making for more than 200 years, is usually only found in the front portion where the wig is attached to the forehead with tape and glue to keep it in place and create a hairline, Ms. Bond said.

The rest of the wig base is made of cloth strips, she said. Lace-front wigs, she added, typically have two small metal hair clips designed to attach to the wearer’s own hair that is braided under the wig.

A full-lace wig has a base cap that is entirely made of lace that fits over the head and is kept in place as well with tape and glue, she said. There are no hair clips.

“In the last few years, I’ve started seeing people come in with lace-front wigs that they thought were full lace. And they’re always shocked when I tell them that its not a full-lace wig,” said Ms. Bond, who operates a hair salon at 10 E. Marshall St. in Jackson Ward.

“I don’t deal with lace-front wigs,” she said. “The full-lace wig is more expensive, but I want to provide my customers with a quality product.”

Ms. Harris said she started wearing wigs nine years ago after being diagnosed with alopecia.

Ms. Harris said she used to buy lace-front wigs to save money. However, she said that she found that it was worth paying for a full-lace wig made from human hair. She said that the higher-quality wig fit better and was more versatile.

She said she can wash the full-lace wig and generate different styles just as she could when her own hair was intact.

“When the wig is a full lace, I can usually wear it for nine months before I have to replace it,” she said. “It never comes off. I just treat it like my hair.”

She said she bought the falsely labeled wig because she thought she had found a bargain. The shop offered the wig labeled as a full-lace wig for $260, or far less than the $400 Ms. Harris paid for a previous full-lace wig.

“Obviously, it wasn’t worth it. Now I’m just hoping to keep other women from being cheated,” she said.