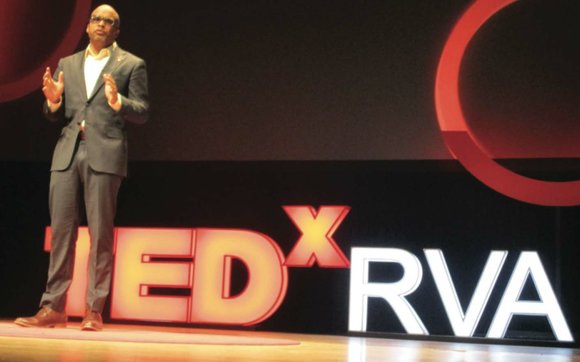 A university president with a comedic touch.

A burlesque performer on a mission to continue the revival of her craft.

A biologist who says he could be on the cusp of discovering a way to help block the spread of lung cancer.

A street musician who seeks to promote universal understanding.

A university department chair with an unbridled passion for self-expression through dance.

And a trauma informed care specialist with a redemptive story to tell.

These six people spoke in one of four sessions at the 4th Annual TEDxRVA last Friday before about 1,700 people at the Carpenter Theatre at Dominion Arts Center in Downtown.

TEDxRVA, a nonprofit devoted to “Ideas Worth Spreading,” selects a variety of local and regional people to give audiences short, inspiring talks on an array of subjects. The overall theme of the all-day event was “Artful.”

In his talk, Virginia State University President Makola Abdullah encouraged audience members not to limit themselves intellectually as he recalled an incident while he was on a cruise several years ago with his wife.

Audience members laughed as Dr. Abdullah told how he became jealous when a cruise singer began to “flirt” with his wife while singing The Temptations’ hit song, “My Girl.”

Dr. Abdullah said the singer then handed him the microphone, and he proceeded to sing the next two verses of the Motown song to his wife. The cruise singer, who may have thought Dr. Abdullah would only sing a few bars, “stood on the side with a look like, ‘What are you doing?’ ’’ Dr. Abdullah said.

The incident became “one of the most significant things in my life,” Dr. Abdullah recalled. He said it revealed to him how someone with a love for science and technology, like him, could turn to another source like music to teach a lesson to others.

He encouraged audience members to “not just use the left brain or the right brain, but your whole mind” to unleash all of your creativity and imagination to fulfill your potential in life.

Longtime burlesque performer Moxie LaBouche of Richmond eloquently spoke about the heyday of burlesque in the early- to mid-1900s, which became an art form comprised of comedy, song and dance routines as women performers removed some of their clothes. She credited late burlesque stars such as Gypsy Rose Lee and Blaze Starr for paving the way for her and other dancers.

Next, Stefan Bekiranov, an associate professor in biochemistry and molecular genetics at the University of Virginia, described how he and a colleague had done research from their homes to discover proteins in the body that could help block lung cancer before it spreads to other parts of the body.

He said they had discovered one protein out of thousands that might help block cancer from metastasizing into other parts of the body.

He wore pajamas as he addressed the crowd from the stage to emphasize the point that his research was done from home.

Street musician Nate Rappole, aka “Gull,” drew loud applause as he played the guitar and drums simultaneously, while modulating his own voice through a microphone-equipped mask.

He said he seeks to promote unity among people of different cultures by performing “public music” in locales ranging from Richmond to small villages in Africa.

He recalled the trepidation he felt when he performed in a town in Nairobi, Kenya, only a few days after the terrorist group Al-Shabaab had bombed a nearby location a few days earlier.

Allison Jackson, a trauma informed care specialist with the Richmond Department of Social Services, told audience members how adults sometimes face lifelong physical, emotional and mental health problems as a result of adverse childhood experiences or ACEs such as neglect and abuse.

She told of one child who developed a range of problems as an adult after no person or agency helped or mentored the child after traumatic childhood experiences.

She then described another child who experienced trauma and later had developmental problems. But that youngster later was able to thrive with the help of a caring adult.

To loud applause, Ms. Jackson revealed she was that child.

“Relationship is the evidence-based best practice,” she said.

Gaynell Sherrod, who chairs Virginia Commonwealth University’s Department of Dance and Choreography and is a Fulbright-Hayes Scholar specializing in African-derived dance forms, provided an energetic conclusion to the session when she came onstage dancing.

She told the audience that she developed a love of dancing at age 4.

She encouraged audience members to dance as “if everyone is watching you.”

She offered other beads of wisdom, including “give yourself permission to be great,” “determine your reality” and “create possibilities.”

“I think we just put a little life in our lives,” she said.