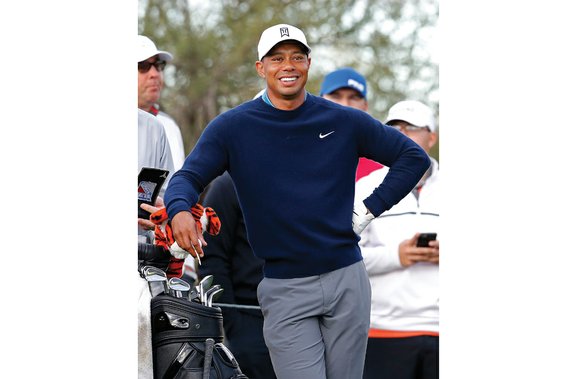 Tiger Woods waits during a practice round at the Waste Management Phoenix Open golf tournament in January 2015. Because of poor scores, he didn’t qualify to play in the tournament’s final two rounds. Rick Scuteri/Associated Press

Ten days after Tiger Woods turned 24, he picked up his 16th career PGA Tour victory by beating Ernie Els in an epic battle at Kapalua.

More than winning his fifth straight PGA Tour event — the longest streak since 1953 — it was how he won. Woods and Els matched eagles on the 18th hole in regulation and birdies in the playoff, and then Woods ended it on the second extra hole with a 40-foot birdie putt that was downhill, into the grain and broke hard to the left.

Els saw the future that January day in 2000, and it was daunting.

No, because golf isn’t in the same galaxy as rock and roll.

But he was right about Woods being a legend in the making, and it didn’t take long. Woods’ 15-shot victory in the U.S. Open that summer at Pebble Beach was the most dominant in 140 years of major championships. He had the career Grand Slam at 24 and remains the only player to win multiple majors in back-to-back seasons.

“Everyone has strengths and weaknesses,” Adam Scott said. “We’ve only seen one bloke out here who did everything better than anyone else.”

Tiger Woods greets Ernie Els on the 18th green of the Mercedes Championships in Kapalua, Hawaii, in January 2000, after they both sank eagle putts to force a playoff. At 24, Woods won on the second playoff hole for his fifth consecutive PGA Tour victory and the 14th of his young career.

His legacy on the golf course is secure no matter what happens the rest of his career, and Woods referred to anything else he achieves as “gravy.” That struck a tone of resignation from Woods, who always wanted to be seen as an athlete instead of a golfer and now can do little more than walk.

Three surgeries on his lower back in just over 18 months make it hard to gauge his future.

There is a tendency to celebrate his 40th birthday by looking back, making it feel more like a retirement party. It’s an easy trap. Woods hasn’t won in more than two years, and when he won his last major in the 2008 U.S. Open at Torrey Pines, Jordan Spieth had just finished his freshman year of high school.

“Where do I see myself in the next five to 10 years?” Woods wrote in a recent blog on his website. “I am still playing golf at the highest level and winning tournaments and major championships. My foundation has been implemented around the globe, and we’ve helped out not just millions, but when I’m all said and done with my life on this earth, it will hopefully be billions.”

From the pinnacle of winning majors to the depths of injury, scandal and divorce, the impact of Woods has not changed. Golf is in a good spot with the next generation of stars — Spieth, Rory McIlroy, Rickie Fowler and Jason Day at the moment — though none move the needle like Woods.

The reminder came at the Wyndham Championship in Greensboro, N.C., which Woods played for the first time. The tournament printed an additional 39,000 tickets when he signed up, and it set attendance records each day. That doesn’t happen with Spieth and McIlroy. It doesn’t happen with Phil Mickelson.

PGA Tour Commissioner Tim Finchem recalled being asked at Torrey Pines this year if he was troubled to see Woods struggling with his short game. He was coming off a career-high 82 in the Phoenix Open. As a fan, Finchem hated to see it. As a commissioner, he wasn’t concerned.

“They said, ‘What do you mean?’ I said, ‘He’s going to tee it up Thursday morning. You know anyone that’s not going to be watching?’” Finchem said. “Everybody wants to see what he can do. Two years from now, he comes out and starts playing OK — or a year from now, whatever it is — he’ll have a huge impact.”

Els was runner-up to Woods for the second time in three months at Kapalua in 2000, and he would go on to finish second to Woods three more times that year. He saw it coming. Els knew it was coming in 1996 at Royal Lytham & St. Annes when Woods consulted him on whether he should turn pro.

Is this what he would have expected 20 years later?

Woods has 79 PGA Tour victories (second only to 82 by Sam Snead) and 14 majors (trailing the 18 won by Jack Nicklaus). The only reason to suggest those numbers should be higher is because Woods achieved so much so quickly. The standard kept going up.

Woods is hopeful his 40th year brings good health and a chance to compete again. He remains four majors short of Nicklaus — no one has ever won more than three majors in their 40s. The odds are against him historically, physically, maybe even emotionally.

“If that’s all it entails,” Woods said in The Bahamas about his career, “then I’ve had a pretty good run. But I’m hoping that’s not it.”