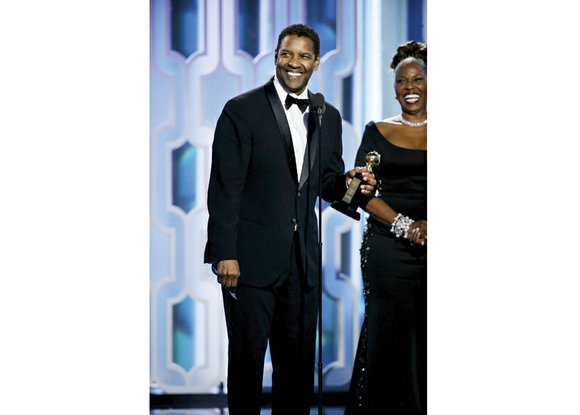 The 61-year-old actor is only the third African-American to be recognized in the more than 60-year history of the award.

Mr. Washington was presented with the Cecil B. DeMille Award at the Golden Globes ceremony in recognition of his work in front of and behind the camera. He accepted the award flanked by his wife, Pauletta, and three of his children, but said he couldn’t read his prepared speech because he had forgotten his glasses.

“Yeah, I did need my glasses,” he said, chuckling as he fumbled with his speech in his hands.

In his short speech, Mr. Washington thanked the Hollywood Foreign Press Association, the organization that awards the Golden Globes, “for supporting me over the years. They always made me feel like a friend or part of the party.”

Mr. Washington’s movie roles have ranged from activist Malcolm X, to a drunk but heroic pilot in “Flight” and a rogue detective in “Training Day,” for which he won his second Oscar in 2002. 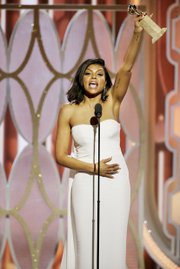 “Empire” star Taraji P. Henson takes a moment to thank the people who helped her career in winning the Golden Globe Award for best actress in a TV series or drama.

She beat out several other actresses, including Viola Davis, who was nominated for “How to Get Away With Murder” on ABC television.

“Who knew that playing an ex-convict would take me all around the globe?” Ms. Henson said of her character, who spent 17 years in jail for drug dealing.

Mr. DiCaprio beat Will Smith, who was nominated for best actor for his role in “Concussion.”

Matt Damon, star of “The Martian,” won best comedy actor for the film about an astronaut stranded on Mars, and the film won the best comedy/musical movie category.