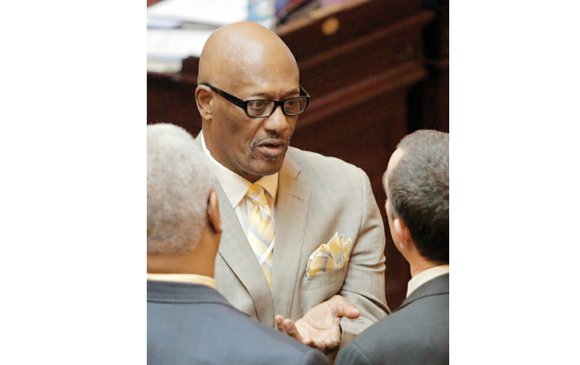 Charlie Stukes, one of seven 2016 inductees into the Virginia Sports Hall of Fame, talks with state Sen. A. Donald McEachin of Henrico County, left, and Lt. Gov. Ralph Northamon Tuesday at the General Assembly, where the inductees were recognized. Photo by Sandra Sellars

For the second year in a row, a former Virginia Union University basketball center has been named to the Virginia Sports Hall of Fame.

Charles Oakley, the NCAA Division II Player of the Year for VUU in 1985, will be inducted April 30 at the Renaissance-Portsmouth Norfolk Waterfront Hotel in Portsmouth.

A year ago, former Panther Ben Wallace, who played with the NBA’s Detroit Pistons, was named to the Virginia Sports Hall of Fame that has its museum and headquarters in Portsmouth.

Recruited to VUU out of Cleveland by former Coach Dave Robbins, Oakley averaged 24.3 points and 17.3 rebounds his senior season, helping the Panthers to a 30-1 record.

Farrior starred at Matoaca High School and the University of Virginia before graduating to NFL fame with the New York Jets and Pittsburgh Steelers.

The bruising linebacker helped the Steelers to two Super Bowl titles and was twice an All-Pro pick in 15 NFL seasons.

Stukes, from segregated Crestwood High School in Chesapeake, was an All-CIAA performer at Maryland State (now University of Maryland-Eastern Shore) before entering the NFL with the Baltimore Colts in 1967.

The cornerback had 32 career interceptions and was a starter for Baltimore in its victory over Dallas in Super Bowl V.