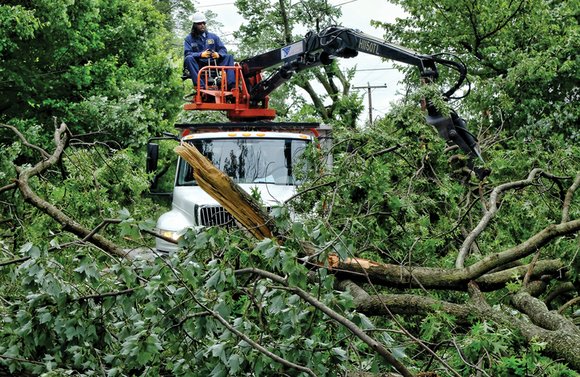 Cleanup is still underway after the June 16 storm. Here a city worker uses heavy machinery to pick up a mass of fallen limbs on Claremont Avenue. More than 900 city trees were toppled during the event, and some were weakened enough to fall days later. Photo by Sandra Sellars

Rosie Lee Woods, like dozens of city residents, has a reminder of the powerful storm that roared through the city June 16, knocking out power, felling trees and creating havoc.

She can look out at the remains of the giant oak that stood in front of her North Side home, one of hundreds of city-owned trees toppled by the storm. Fortunately, her home didn’t suffer a scratch as the tree fell parallel to the street.

After the storm, city workers came to the 3500 block of Hazelhurst Avenue and removed the massive branches that blocked the street, she said.

However, the tree’s 20-foot trunk and huge root ball still fill the grassy strip between the curb and sidewalk in front of her home as well as a neighbor’s home.

The retired nurse can only hope that city workers soon will return to remove the rest of the tree and repair the portion of the sidewalk and steps of her walkway that were destroyed when the tree toppled over.

“I really need my walkway. I have arthritis and have to use a cane. I can walk on the grass to get around the tree, but it is not easy,” she said.

She hasn’t yet been told when that might happen. Richmond is still cleaning up from the storm. In the days after the event, city officials, along with the power company, restored normalcy in the wake of the worst damage since Hurricane Ernesto in 2006.

The costs from the storm put additional strains on the city budget, which already was running a deficit, in part, because of a winter storm that cost the city an unexpected $1.9 million. This week, Richmond City Council voted 6-3 to approve an administration plan to dip into savings to protect the city from a deficit.

The plan is expected to cover the expenses from the storm. Preliminary cost estimates presented to the council last week put the storm’s damage to public property and cleanup expenses around $1 million, though that cost could easily go higher when all the bills are tallied.

That does not include the estimated $770,000 in damage that Richmond Public Schools estimated was done to 10 schools, nor the damage to private property.

Both the city and RPS carry insurance policies that kick in to cover damage above $100,000 to buildings, according to officials.

However, the trees, sidewalks and traffic lights that were damaged or destroyed are not expected to be covered by insurance. For example, the city estimates it likely would need to spend $500,000 or more to replace the 900 city trees felled by the storm.

The city also estimates it could cost $300,000 to repair the damaged sidewalks.

Damage to streetlights and traffic signs and signals also has been estimated around $175,000.

That doesn’t count the overtime for the city workers and contractors who cleared 156 streets of fallen trees during the first weekend after the storm.

Already, workers have trucked away 1,000 tons of storm debris, the city reports. However, as Ms. Woods’ situation indicates, the city is far from done with the recovery.