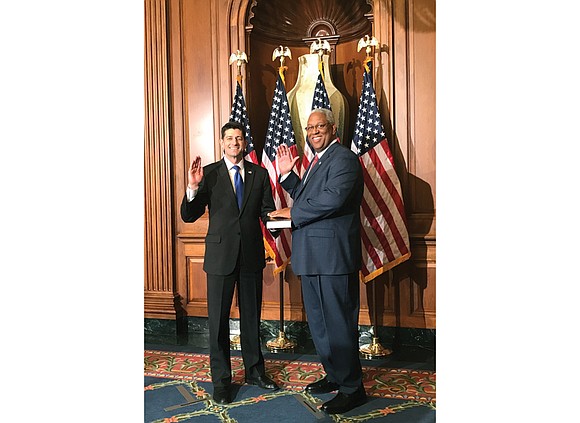 Congressman A. Donald McEachin of Henrico County takes the oath of office Tuesday as House Speaker Paul D. Ryan holds a Bible during the ceremony at the U.S. Capitol in Washington. He is the second African-American to represent Virginia in Congress since the late 1890s. Courtesy of Jamitress Bowden

U.S. Rep. A. Donald McEachin of Henrico County was sworn in as a member of the 115th Congress on Tuesday at a ceremony at the U.S. Capitol in Washington.

“I am humbled and honored to serve in the U.S. House of Representatives on behalf of Virginians in the 4th Congressional District,” said Rep. McEachin in a statement Tuesday.

The district, which was re-drawn by a federal court in 2016, includes all of Richmond, Petersburg, Charles City, Colonial Heights, Dinwiddie, Emporia, Greensville, Hopewell, Prince George, Southampton, Surry and Sussex, as well as parts of Chesterfield, Henrico, Chesapeake and Suffolk.

Rep. McEachin is the second African-American to represent Virginia in the U.S. House of Representatives since the late 1890s. He joins Rep. Robert C. Scott, the 3rd District Democrat who previously represented Richmond in Congress.

The progressive Virginia legislator and partner at the Richmond area law firm McEachin and Gee told the Free Press on Wednesday he is looking to focus his long-term priorities on education reform, increasing the time between deployments for active-duty military and increasing rural broadband internet service within the 4th District. However, issues like capitalizing on federal tax credits to repair and rebuild crumbling schools, decreasing federal oversight of student testing and reducing the suspension rate of African-American students in public schools, rank high on his to-do list, he said.

“Although we’ve got a number of priorities, one of the most important things we want to focus on is education, and supporting local improvement in educational infrastructure at the federal level,” the 55-year-old lawmaker said.

Rep. McEachin represented Richmond and Henrico in the House of Delegates from 1996 to 2002 and from 2006 to 2008, when he launched a successful bid for the state Senate. He served in the Senate until January, and was chairman of the Senate Democratic Caucus.

He has been a proponent of state Medicaid expansion and strengthening Obamacare, both issues that have been directly challenged by Republicans and will become lynchpin issues in the new Trump administration.

Rep. McEachin said he plans on “playing a lot of defense” in the GOP-majority House of Representatives.

“American people aren’t going to stand for repealing Obamacare without replacing it. I don’t think the Republicans know what to do,” he said about the program under which more than 20 million Americans have health insurance.

Like several other freshman members of Congress, Rep. McEachin wants to be appointed to the U.S. House Committee on Energy and Commerce, one of the oldest and most sought after committee appointments, he said.

The Armed Services and Natural Resources committees are his more realistic choices as a freshman, he said, both committees that he’s extremely excited about.

Congressman McEachin is looking forward to representing the demographically diverse district and making those issues of his constituents known, he said.

“What it calls for is to have the intellectual curiosity to meet people where they are, and represent those issues properly to Congress.”

His leadership skills already have paid off.