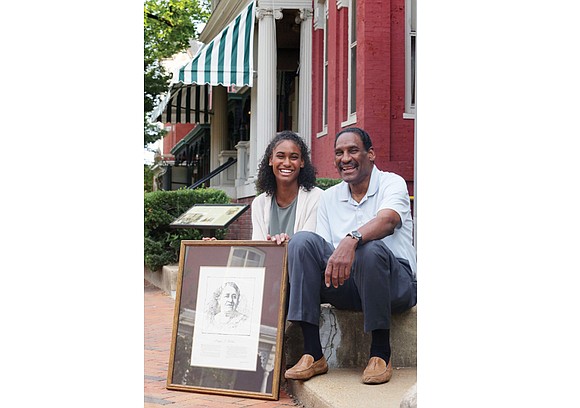 For the descendants of Maggie Lena Walker, the unveiling of a statue in her honor in Downtown has been a long time coming.

“I think (the recognition) is long overdue,” said Dr. Johnny Mickens III, an assistant principal at Huguenot High School and the great-grandson of Maggie Walker.

“I think that what the city did was a wonderful thing and I’d like to thank them.”

On Saturday, July 15, on what would have been Mrs. Walker’s 153rd birthday, Dr. Mickens and other family members, elected officials, dozens of Maggie L. Walker High School alumni and people across the region will embrace the moment as the City of Richmond dedicates the long-awaited statue to Mrs. Walker — a pioneer not only in the world of finance, but a pioneer for African-Americans and women.

The ceremony will start at 10 a.m. at the plaza at Adams and Broad streets, where Mrs. Walker’s statue will mark the gateway to Jackson Ward, the neighborhood where Mrs. Walker’s home at 110 ½ E. Leigh St. is a National Historic Site run by the National Park Service. Public tours of her home will be available following the ceremony.

In 1903 with the start of the St. Luke Penny Saving Bank, Mrs. Walker became the first African-American woman in the nation to charter a bank and become its president.

With a life and career dedicated to bettering the financial and educational standing and civil rights of African-Americans, Mrs. Walker achieved many milestones, including time spent as an educator, a leader with the Independent Order of St. Luke benevolent society, editor of the St. Luke Herald newspaper and a businesswoman who opened the St. Luke Emporium department store at 112 Broad St. in 1905.

Her legacy and achievements continue to inspire generations of people today.

“I think for the whole family, (her legacy) has instilled giving back to the community one way or another, either through jobs or volunteer work,” Dr. Mickens said. “She also instilled in us the importance of education.”

Dr. Mickens’ daughter, 19-year-old Elizabeth “Liza” Walker Mickens, said being the great-great-granddaughter of such an icon is a privilege.

“It’s a huge honor for her to be honored for her achievements and what she did in the community. But as a descendant, it is an honor to be related to such a remarkable woman,” said Ms. Mickens, a junior at James Madison University.

Ms. Mickens will speak on behalf of the Walker descendants at Saturday’s program. She said she has learned more about Mrs. Walker’s values and the lessons she held dear by speaking about her.

“Carrying on her traditions and those of my family have taught me to be proud to tell her story,” Ms. Mickens said. “It has really given me great communication skills.”

The statue will highlight a key part of U.S. history, Dr. Mickens said, specifically the contributions of people of color, which often go unrecognized.

“It will go a long way to show the importance African-Americans and other nationalities played in the history of America,” he said.

Its location also holds great historical value because Jackson Ward was known as the Harlem of the South, Ms. Mickens said, where African-American businesses flourished.

To Ms. Mickens, the statue will portray a genuine role model for future generations to see and from which to learn.