Spotlight on RPEC’s 2017 Peacemakers of the Year 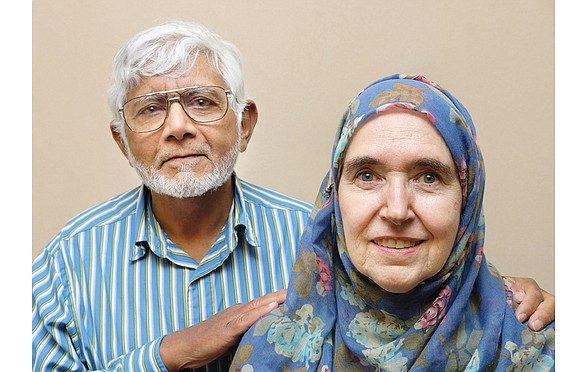 For decades, Malik and Annette Khan have worked to build bridges between the Muslim community and others in the Richmond community.

Much of their work has been done through interfaith organizations and nurturing dialogue based on common interests and shared values.

One of the biggest obstacles they faced, Mr. Khan recalls, was immediately following the 9/11 terrorists attacks in 2001. At the time, he was president of the Islamic Center of Virginia.

“I had to convey and convince that all Muslims were not terrorists — that it was a few who had committed this hateful, heinous crime and that the majority of American Muslims were peace loving citizens.”

The Khans’ work, begun well before then, continues today with their active mentorship of Muslim young people in Greater Richmond and with the RVA Peace Festival. They also participate in several local organizations that promote peace and social justice.

For their years of work and commitment to peace, the Khans have been named the 2017 Peacemakers of the Year

The award was presented to the Khans by the Richmond Peace Education Center last week at its member dinner. Because it is Ramadan, a month when the Khans and Muslims around the world observe their faith’s rules of fasting daily from sunup to sundown, the RPEC’s board arranged the June 14 awards program around an iftar dinner in a spirit of solidarity and understanding. Attendees waited until sunset to break the fast with the Khans, even though that meant serving dinner at 8:45 p.m.

It was a gesture not lost on the Khans, who were humbled by news of the award. “It was totally unexpected and not sought after,” the couple says. “We think many others are more deserving.” Receiving the annual award “gives us the opportunity to tell more Richmonders about organizations that do the work of peace and bridge building,” the Khans say, pointing to the RPEC, the Interfaith Council of Greater Richmond, Initiatives of Change/Hope in the Cities and the Virginia Center for Inclusive Communities.

When the couple settled in Richmond nearly 30 years ago, they began hosting sessions with teens, offering discussion and life lessons beyond what the mosque offered. Topics included translations of prayer, what is fasting, why Muslims fast, how to pray at school and more.

“The group has grown to about 10 families who meet on Saturday or Sunday evenings,” Mrs. Khan says. “He meets with them to have conversations about how to respond to current events, and he mentors them.”

Through the years, they also have given presentations at various churches, schools and community centers about Islam to educate non-Muslims. They also have hosted iftars in the community and arranged for Muslim teens to volunteer in the city.

In today’s climate, the Khans say that working toward peace is more important than ever. “Acts of violence and/or hate not just against Muslims, but against all, including Jews, Sikhs and African-Americans, indicate that we have a long way to go,” Mr. Khan says. “Without peace, the consequences are too dark, grim and scary.” Though the task is heavy, Mr. Khan believes that peace is best achieved through deliberate action.

“Talk is cheap. We need to be action oriented. We need to demonstrate through common causes that we can achieve a lot by joining hands. If all else fails, the least we can do is to convey that we must learn to respectfully live with differences.” Mrs. Khan agrees, adding that learning the truth — that the word Islam means peace — is a step.

She advises people to go to the source to learn what being Muslim is really about.

“We don’t have to believe the same thing,” she says. “Talk to Muslims. Talk to Sikhs. They are not Bin Laden. Invite someone into your home and have cookies or tea. Invite them in and get to know them.”

Family: No children; Malik’s elderly mother lives with us. One senior cat, Billou.

Latest honor: Recipients of the 2017 Peacemakers of the Year Award from the Richmond Peace Education Center.

Why this recognition is significant:  We need peace in the Middle East and in the world. Domestically, we need to foster a climate of diversity, harmony and acceptance across many factions — race, ethnicity and religion.

What is the biggest inspiration behind the youth group initiative you started 30 years ago: Muslim youths needed — and still need — more opportunities to learn about their faith and the way to be good American Muslim citizens.

The RVA Peace Festival is: The centerpiece of the RVA Peace Festival has been and will continue to be an interfaith worship service. It has included speakers from the Christian, Jewish, Muslim, Buddhist, Baha’i, Hindu and Sikh communities. In addition, the tragedy of 9/11 is remembered with a moment of silence and frequently includes the release of doves.

Mission of the festival: To provide an opportunity for children, youths and adults of Greater Richmond to gather in celebration of peace and diversity. It is our hope that this will foster a growing sense of community.

Idea for the festival started because: In summer 2004, members of the Bon Air United Methodist Church contacted members of the Islamic Center of Virginia and proposed that they join together, along with other faith-based organizations, to hold an event that would foster peace in the Richmond area.

Importance of peace: Internationally, we see the recurring loss of innocent lives and the continued destruction of cities in the Middle East. Domestically, the current climate dangerously breeds hate and contempt against all Muslims. We need to foster an environment of better understanding. Not all Muslims are terrorists.

Why we advocate for it: Because many people are bullied, harmed or even killed because of the hatred that comes from a lack of understanding.

Today’s young people are: Many don’t show enough respect to their teachers and parents. They’re so used to getting their way and what they want. In our work with the youths, we expose them to active community service at an early age, in many cases with an interfaith group of students. They are our future.

How I see the world (Malik Khan): The world is comprised of good and bad, but I see it as the glass being half full. There are numerous challenges across the globe. But I have faith that eventually good and justice shall prevail, but it requires a lot of work.

How I see the world (Annette Khan): That most people follow the “Golden Rule” according to their own faith perspectives. Nearly every faith has the same belief — either “Do unto others as you would have them do unto you,” or the opposite, “Don’t do to others what you don’t want done to you.”

Outlook at start of day (Malik Khan): As the primary caregiver for my elderly mother, my day starts out by trying to figure what she needs. If I had a phrase, it I would be, “How can I help her.”

Quote or phrase that keeps me motivated (Malik Khan): I remind myself constantly that I need to be patient.

Quote or phrase that keeps me motivated (Annette Khan): “Trust in Allah but tie up your camel.”

Nobody knows I (Malik Khan): Rode a horse once.

Nobody knows I (Annette Khan): Used to ride a motorcycle when I was in high school.

Book that influenced me the most (Malik Khan): “Principle of Islamic Jurisprudence” by Dr. Mohammad Hashim Kamali.

Book that influenced me the most (Annette Khan): “The Bible, the Qur’an and Science” by Maurice Bucaille.

What I’m reading now (Malik Khan): I am studying the theory of relativity on my own. There is plenty of material on the internet, but one author and professor who really impresses me is Professor Leonard Susskind of Stanford University.

What I’m reading now (Annette Khan): “Acts of Faith: The Story of an American Muslim, the Struggle for the Soul of a Generation” by Eboo Patel.

If I’ve learned one thing in life, it is (Malik Khan): Have faith and be patient.

If I’ve learned one thing in life, it is (Annette Khan): There really are more good people in the world than there is hate.

Next goal (Annette Khan): Continue with the school until I retire, and then devote more time for interfaith and peace activities.