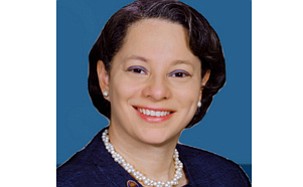 In 2010, when I became the first member of the Virginia House of Delegates to be pregnant while in office, I faced an unanticipated question: Are you retiring?

Although Delegate Chris Peace and his wife were expecting a child at the same time, no one asked him about his retirement plans. Chris and I laughed about the difference in reactions we faced. But it was a stark reminder that inequities persist in this country based on gender.

For women of color, inequity persists on two fronts — gender and race. Women of color face inequity in every part of society — employment and earning, family support such as child care or elder care, political participation, health and well-being, access to the C-suite and the criminal justice system.

One hundred and fifty years ago, the 14th Amendment’s Equal Protection Clause in the U.S. Constitution prohibited states from denying to any person within its jurisdiction “the equal protection of the laws.” And shortly thereafter, the 15th Amendment declared the right to vote shall not be denied “on account of race, color, or previous condition of servitude.”

Despite these gains, women still have not attained full equality under the Constitution. Since it first applied the Equal Protection Clause to prohibit differential treatment on the basis of sex in the 1971 Reed v. Reed decision, the U.S. Supreme Court has applied a less rigorous standard of review for sex discrimination cases than for racial discrimination cases.

As a result, true equality of rights under the law remains elusive for women.

We need the Equal Rights Amendment to ensure “[e]quality of rights under the law shall not be denied or abridged by the United States or by any state on account of sex.”

During the Suffrage Movement and the Civil Rights Movement, the efforts of women of color were ignored as we were relegated to the background.

In the 1913 Suffrage Parade organized by Alice Paul in Washington, black women were asked to march in the back for fear of offending Southern white allies.

Despite that, dozens of black women — including the 22 founding members of my sorority, Delta Sigma Theta — marched.

During the 1963 March on Washington, women had to fight to be included in the program at all.

Today is no different, and I am proud to be among a number of women of color taking up the mantle to ratify the Equal Rights Amendment.

Too often, Virginia has been on the wrong side of history — the capital of the Confederacy, late to ratify the 14th and 19th Amendments, the epicenter of Massive Resistance.

But in 2019 as we celebrate the 400th anniversary of Africans and European women arriving to the Virginia colony, we can be the state that puts the ERA in the Constitution.

Instead of being dragged forward into progress, we can lead the change for future generations.

The writer represents the 9th District in the Virginia Senate that includes parts of Richmond, parts of Henrico and Hanover counties and all of Charles City County.