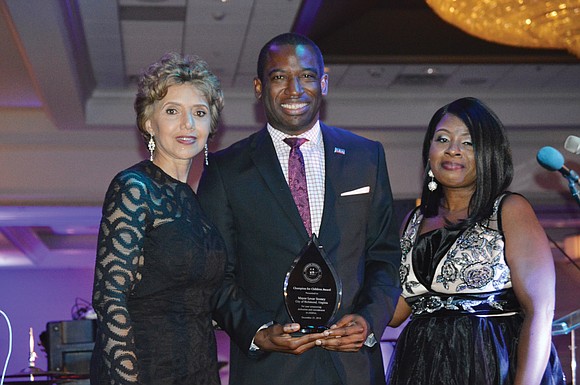 Mayor Levar M. Stoney shows off the “Champion for Children” Award he received from the Richmond Chapter of The Continental Societies at the group’s Dec. 21 fundraising dinner-dance in Downtown. With him are Beverly Davis, left, chair of the organization’s Ways and Means Committee, and Nkechi George-Winkler, president of the Richmond chapter. Photo by Michael Worrell

Dr. Clinton V. Turner, former Virginia secretary of agriculture and consumer services, poses for a photograph with Congresswoman-elect Abigail Spanberger of Henrico County during the reception at the Richmond Continentals’ “Elegance in Black & White” fundraising gala.

The Richmond Chapter of the Continental Societies Inc. honored Mayor Levar M. Stoney with its “Champion for Children” Award at the group’s 43rd Annual Elegance in Black & White gala on Dec. 21.

In brief remarks to the audience of nearly 500 people who gathered at a Downtown hotel for the fundraising dinner-dance, Mayor Stoney touted his efforts to make children the top priority for the city since taking office in 2017.

He cited the expansion of after-school programs, the opening of community centers on weekends, the pending construction of three new schools and his plan to invest $800 million in additional schools in the next 20 years as evidence of such efforts.

The mayor was one of three honorees at the event.

The 33-member chapter, led by Nkechi George-Winkler, also presented “Champion for Children” awards to Henrico County-based Genworth Financial, which contributes to child-serving nonprofits, and to Necole Parker Green, a Virginia Union University graduate who is the founder and chief executive officer of The Elocen Group in Bowie, Md., and raises money for scholarships and other student supports through her company’s foundation.

Congresswoman-elect Abigail Spanberger of Henrico County offered greetings at the event before she heads to Washington to be sworn in early next year to represent Virginia’s 7th District in the U.S. House of Representatives.

Other speakers included Jordan Woods, an Old Dominion University freshman representing students who have received Helen W.P. Wallace scholarships from the chapter, and Makaia Ransom, a spoken word artist and George Wythe High School student who was among 11 students sponsored by the chapter in the annual NAACP ACT-SO competition.

The $100-a-person gala, which featured the music of the Katz Band, is the chapter’s main fundraiser.