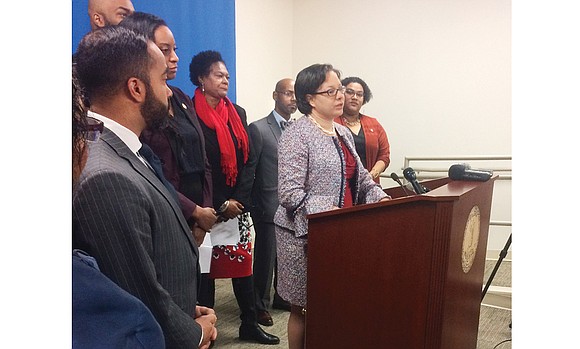 The Virginia Legislative Black Caucus was joined Monday by a bipartisan group of state legislators supporting bills to combat the school-to-prison pipeline.

Expulsion and suspension policies are the targets of several pieces of legislation, including a bill by Delegate Jeffrey M. Bourne, a Democrat representing Richmond. House Bill 1600 caps long-term suspension at 45 days instead of the current 364 days.

“We cannot keep using access, or lack thereof, to education as a punishment and continue to expect positive results,” said Delegate Bourne, a former member and chairman of the Richmond School Board.

The VLBC said it wanted to highlight how legislators are crossing party lines on the issues. The process of separating students from their environment and ultimately sending them into the criminal justice system has come to be known as the school-to-prison pipeline.  A 2015 study from the Center for Public Integrity said that on average, Virginia refers more students to law enforcement than any other state.

First-year Delegate Jennifer Carroll Foy, a Woodbridge Democrat, described the problem as “the No. 1 civil rights issue of our modern time.” She has introduced HB 445, which would allow school systems to discipline students who commit certain misdemeanors instead of being required to report those crimes to police.

Richmond Sen. Jennifer L. McClellan, a Democrat, said she has proposed budget amendments to support school programs for at-risk students and also to set aside almost $700 million to end a cap on state-funded school support positions.

“If we don’t put our money where our mouth is, we will lose an entire generation of students to the school-to-prison pipeline,” Sen. McClellan said. “Policy is only one side of the coin.”

Standing beside the lawmakers at Monday’s news conference was Stacey Doss, a mother of two boys in Lynchburg’s public school system. Her older son, who she said is autistic, drew national attention and the focus of the Center for Public Integrity after being charged with a felony in 2014 as an 11-year-old.

He had struggled with a school resource officer who had grabbed him after he had left class with other students. The same officer earlier had accused him of a misdemeanor for kicking a trash can. The charges were dropped after an outcry over the case.

Ms. Doss said her 5-year-old has speech problems. Both sons have been ostracized and suspended, she said, with her younger boy currently under suspension for disorderly behavior.

“He asked me, ‘Why can’t I go to school? I really want to go to school. I miss my friends,’ ” Ms. Doss said. “He doesn’t understand what is happening, but he does know that he is being kept away from something he enjoys.”