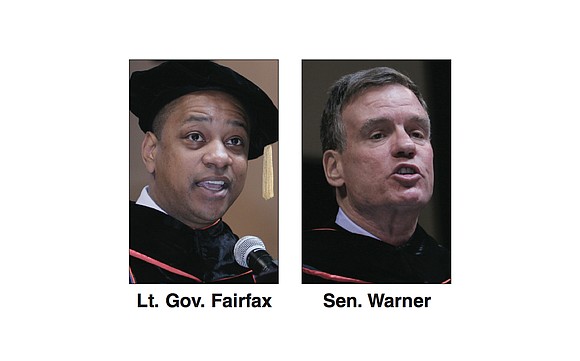 By Thomas Kidd and Leah Hobbs

Lt. Gov. Justin E. Fairfax urged Virginia State University graduates to use the strengths of the past to build a brighter future.

“Simply wishing you congratulations is not enough. I want to call your attention to a greater spirit at work today. You are not merely the sum total of your accomplishments. But, rather, you are — we all are — our ancestors’ wildest dreams,” the 39-year-old former federal prosecutor told the Class of 2018.

Lt. Gov. Fairfax, who was sworn into office in January, is the second African-American to win statewide elective office in Virginia.

With 670 degrees to confer on Mother’s Day, VSU officials held a morning and an afternoon ceremony to accommodate the large numbers of graduates, their families and friends at the VSU Multi-Purpose Center. Lt. Gov. Fairfax spoke at the morning exercise and U.S. Sen. Mark R. Warner gave the afternoon address.

Lt. Gov. Fairfax talked about VSU’s history dating to 1882 as Virginia Normal and Collegiate Institute. He told the audience that VSU’s first president, John Mercer Langston, was the great uncle of poet and writer Langston Hughes and also the first African-American to be elected to the U.S. House of Representatives from Virginia. He shared how President Langston was tireless in his efforts, fought against seemingly insurmountable odds and established what is being realized today in by the Class of 2018.

“This is further evidence that you walk in the footsteps of giants,” he said.

The lieutenant governor then shared a more personal story about Simon, a Virginia slave, who on June 5, 1798, was handed a manumission document — a formal act freeing him from slavery.

“This document freed Simon and naturally changed the entire trajectory of his life,” Lt. Gov. Fairfax said before revealing that Simon was, in fact, Simon Fairfax, his great-great-great-grandfather.

Even more poignant was that moment before his swearing in as Virginia’s 41st lieutenant governor — and only the second African-American to be elected to the position since former Gov. L. Douglas Wilder’s tenure in the No. 2 position more than 30 years earlier — Mr. Fairfax’s father handed him a copy of Simon’s manumission paper. The 220-year-old document had been found in the Fairfax County Courthouse a week prior to the inauguration.

“I had lived my whole life not knowing about him,” Lt. Gov. Fairfax told the audience. “But in that moment, I felt the awesome weight of history and the power that love, hope and opportunity can give.”

He challenged graduates to follow in the footsteps of their ancestors — to have the determination, grit and courage to face and overcome obstacles and let their accomplishments mark a path toward greater successes for generations to follow.

“It’s not enough to succeed on your own. You have to lift other people as you climb,” he said. “I know how important this philosophy is because I, like you, have been so blessed to benefit from it.”

During his afternoon address, Sen. Warner talked about his experience as the first in his family to graduate from college. He said he knew that his education would take him places where he would be able to do things and go places that his parents could only dream of.

“Today, you have that same promise, but with it comes a responsibility. I believe your obligation is to strive, to reach and to not be afraid to fail,” he said.

The George Washington University and Harvard Law School graduate told the audience how he invested his life savings of $5,000 in an energy startup company that failed within six weeks. He then tried real estate and failed at that within six months, he said. His third try was investing in a new technology — cellular phone service. He co-founded a company that later became Nextel Communications, which merged with Sprint in 2005.

“Only in America could I have had not one, not two, but three chances,” Sen. Warner said. “Truth is, I’m not sure if I had not been a white guy with the right education that I would have got three chances, or two chances, or even one chance. If we are going to realize the potential of this country, one of the things we need to make sure of is that when you go out, we can’t guarantee you success, but we must guarantee that everyone in America gets their fair shot.”

Sen. Warner served as Virginia’s governor from 2002 to 2006 before taking office as a U.S. senator in January 2009. He is vice chair of the Senate Intelligence Committee that is investigating Russian interference in the 2016 presidential election and connections to the Trump campaign.

Also recognized were Ashley Marie Shanfelter of North Dinwiddie County, the highest ranking senior in the Class of 2018, who had a perfect 4.0 GPA in earning a bachelor’s in interdisciplinary studies with a minor in special education, and Sharon Evangeline Crenshaw, who received the VSU Alumnus of the Year Award for her support of the university.

Dr. Alma Cobb Hobbs received the Presidential Award of Distinction from VSU President Makola M. Abdullah for her contributions to the community and as a member of the VSU Board of Visitors from 2004 to 2008.

The Reginald F. Lewis Prize, which is awarded to a graduating senior from the VSU Reginald F. Lewis College of Business who has made the most progress from their sophomore year to senior year, was presented to Mabertine Pierre of Portsmouth, who will pursue graduate studies in film at New York University.

Ms. McCoy reminded her classmates to be themselves when they go out into the world.

Shaquille Robinson, right, shows off his new bachelor’s degree and his young son, Shaquille Jr., during the afternoon commencement on Mother’s Day.

“Don’t walk through life trying to be exactly like someone else that you look up to. The world doesn’t need another Beyoncé, or Malcolm X or Barack Obama,” she said. “What the world needs is for you to bring your personality, transformative ideas and individual touch to ensure that the world is a better place to live because of us.

“Although we may be frightened, right now is an integral part of our lives where we can either choose to walk with fear or walk with faith,” she said. “The two cannot coexist, nor can they collaborate,” Ms. McCoy continued. “The decisions you make every single day will determine how you conquer your opportunities, your obstacles and your life.”

“There are many who dream of becoming doctors, lawyers, educators and engineers,” he said. “It is us, the dreamers, who have the ambition to see past our goals and go to discover the next cure, to solve the next big case, and in turn, enrich future generations.”