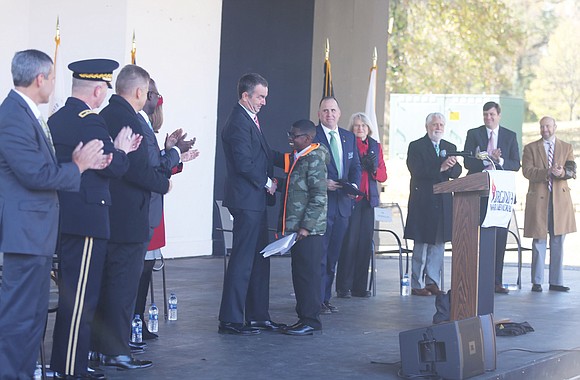 Above, Gov. Ralph S. Northam congratulates Martene Whiting Jr., 13, a seventh-grader at Tabb Middle School in Yorktown, after he read his winning essay on “What was the impact of World War I in Virginia?” during last Sunday’s Veterans Day ceremony at Dogwood Dell. The essay contest and ceremony was part of the state’s commemoration of the 100th anniversary of the end of World War I, known as Armistice Day.

Martene and Samantha Whiting, and sons Emmanuel, 7, and Danuel, 5

The youngster’s parents, Martene and Samantha Whiting, above, both Air Force veterans, stand as the crowd recognizes them during the ceremony. Clapping for their older brother are Emmanuel, 7, and Danuel, 5.

Commissioner John L. Newby II, with the Department of Veteran Services of the Commonwealth of Virginia participates in the Commonwealth's Veterans Day ceremony at Dogwood Dell Sunday , Nov. 11, 2018, the 100th anniversary of Armistice Day with his daughter Jillian Newby, 9, both of Henrico County. (Regina H. Boone/Richmond Free Press)