Coliseum’s success raises new questions about need to replace it 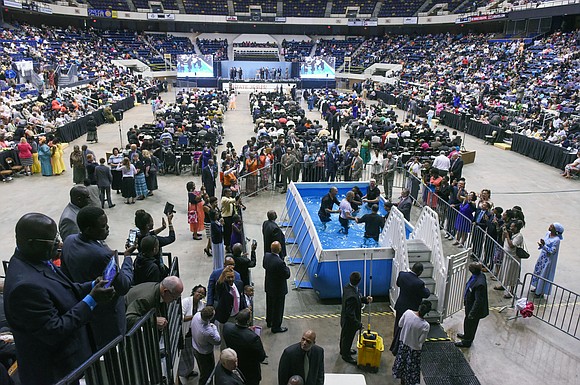 The Richmond Coliseum is packed for a baptism ceremony during a Jehovah’s Witness Convention in July 2015. The denomination’s annual conventions drew thousands of people for several consecutive weekends each summer to the Downtown venue until they were moved this year to the Greater Richmond Convention Center. Clement Britt

The 13,500-seat Richmond Coliseum has been the busiest arena in Virginia during the past six years, according to a Chicago-based consulting company that was paid $500,000 by the city to review a proposal to replace the facility.

Hunden Strategic Partners found that the 47-year-old arena averaged more events per year than the four other indoor arenas in Virginia combined. It also hosted more events than each of the far larger arenas in Greensboro and Raleigh, N.C.

The findings raise questions as to why a new, larger coliseum is needed, a question advocates have yet to fully address. Indeed, the only public response to date has been that other state capitals have nicer, larger coliseums than Richmond.

According to the study Hunden delivered to the city and its financial consultant on Oct. 31, the Richmond Coliseum hosted 550 events from 2013 to 2018, or an average of 92 concerts, sporting events, conferences and other activities per year.

By comparison, the University of Virginia’s 15,200-seat John Paul Jones Arena in Charlottesville, which is described as Richmond’s toughest in-state competition for concerts, hosted an average of 10 ticketed events a year in the three-year period from 2015 to 2017, Hunden reported.

The Richmond Coliseum is going out with a bang.

Before it is shut down at the end of the year as the city mulls a plan to build a replacement, the 13,500-seat arena will host several more big events that show the space is still in demand from promoters and others who want and need the Richmond area’s biggest venue.

The schedule includes a visit from Snoop Dogg’s Puff Puff Pass tour featuring the hip-hop artist and five other acts on Thursday, Dec. 6; a performance by the Trans-Siberian Orchestra on Wednesday, Dec. 19, and a two-show finale featuring the Harlem Globetrotters on Saturday, Dec. 29.

According to Hunden, Richmond’s indoor arena also was busier than Virginia Beach’s outdoor amphitheatre, which hosted an average of 25.5 events per year during the period from 2015 to 2017.

The study essentially belies the claims of advocates for a new facility, who suggest that the Richmond Coliseum is a failed “white elephant’ that costs city taxpayers too much — about $1.5 million a year for operations and debt repayment — and delivers too little.

The Hunden study paints a different picture of an active Richmond event center despite the loss of perennials, such as the Ringling Brothers & Barnum & Bailey Circus, which shut down its operations.

The pending closure of the Coliseum has led to a reduction of business for the facility, which is to close at the end of the year while the city considers replacing it. The planned closure already has forced regular customers to look elsewhere for space, including a Richmond arena football team that has relocated to Wheeling, W.Va., and Virginia Commonwealth University, which still is hunting for space for its university-wide commencement in 2019.

New facility proponents argue the old building needs to be replaced by a gleaming $220 million, 17,500-seat venue that would be managed, operated and maintained by a private group led by Thomas F. Farrell II, Dominion Energy’s top executive, without cost to the city.

The only city obligation would be to borrow the money to build it. And advocates, including Mayor Levar M. Stoney, also tout how easy that would be.

The money to repay the debt for constructing a new coliseum and some other public elements is projected to come from tax dollars generated from proposed, privately financed developments like a hotel and hundreds of apartments to be built on public property neighboring the Coliseum and from the projected increase in property taxes in 70 additional blocks of Downtown.

And the city, as well as investors who buy the 30-year bonds the city would sell to raise the needed funds, would count on new development and projected growth in the value of other property to cover the cost.

At this point, there has been no consideration of creating a new hotel and hundreds of new apartments on the public property without including a replacement coliseum.

As critics have noted, if construction of a new Coliseum is removed from the plan, all of the taxes generated by such developments, including the hotel and the apartments, would go directly into the city’s general fund, rather than first being used to cover the cost of a new arena.