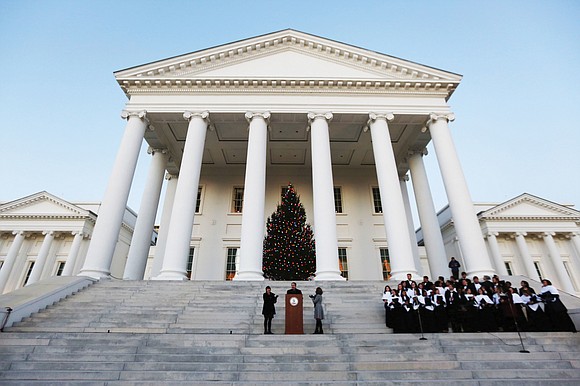 Gov. Ralph S. Northam and First Lady Pamela Northam light the official Virginia Capitol Christmas tree that stands on the South Portico of the Capitol. Participating in the ceremony Wednesday night are the Eastern View High School Troubadors from Culpeper County and Bettina Ring, state secretary of agriculture and forestry. The tree lighting touches off many of the area’s holiday festivities that will take place Friday and Saturday. Photo by Regina H. Boone Richmond Free Press

What: Turning on the holiday lights at the James Center and the lights outlining Downtown buildings.

Where: 10th and Cary streets.

Where: Broad Street from DMV at 2300 W. Broad St. eastbound to 7th Street and the Richmond Coliseum.

Richmond will turn on the holiday lights and welcome Santa to Downtown this weekend to officially launch the celebration of the season in the Capital City.

First up will be the 34th Annual Grand Illumination on Friday, Nov. 30.

The event will light up the Richmond skyline with “Love Lights” and create a dazzling holiday display at the James Center, 10th and Cary streets in Downtown.

Separately on Friday, holiday revelers will find a traditional, music-filled family Open House at Main Street Station from 5 to 9 p.m., an ice skating rink set up in the 17th Street Farmers’ Market that has been renovated and officially will reopen at 4:30 p.m. and an “Illumination Celebration” at the city’s Kanawha Plaza from 7 to 9 p.m.

“Snoopy,” the beagle character from the Peanuts cartoon, will serve as grand marshal for the 2018 parade, according to the parade’s sponsor, the Dominion Energy Charitable Foundation.

The cartoon character will lead the lineup of bands, giant floats, equestrians and other participants who will walk and ride the 2-mile-plus route from the Virginia Department of Motor Vehicles in the 2300 block of West Broad Street east to 7th Street in Downtown, where the parade will turn north and end at the Richmond Coliseum.

If the weather is good, 70,000 to 100,000 people are expected to line the medians and sidewalks on the north side of Broad Street for the parade that also will air on a Richmond TV station.

The forecast: Rain Friday and Saturday.

Family entertainment is key to the holiday events. Santa, Jack Frost and the Snow Queen will greet people at the Grand Illumination, while the 14-member Good Shot Judy band from Williamsburg will play.

On Saturday, Dec. 1, Mayor Levar M. Stoney also will host an open house from 2 to 4 p.m. at Main Street Station to highlight the annual Winter Market.

Upcoming events also include the 31st Annual Court End Christmas from noon to 5 p.m. Sunday, Dec. 9. Seven historic sites will open their doors, with a free shuttle to allow visitors to travel to the locations, including The Valentine museum and its separate First Freedom Center, the John Marshall House, St. John’s Church, the State Capitol, Monumental Church and the American Civil War Museum and the White House of the Confederacy.