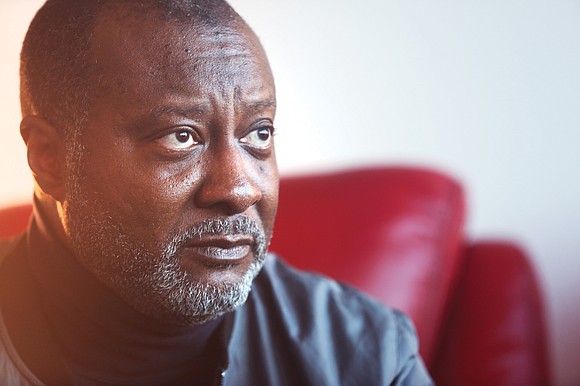 B.K. Fulton, who launched Soulidifly in 2017, says he and the creative team jumped at the chance to tell the story of Bass Reeves, a deputy marshal in the Wild West whose life may have inspired the fictional Lone Ranger character. Photo by Regina H. Boone

Now, potentially millions of people could be introduced to the story of this African-American lawman through a new movie, “Hell on the Border,” that opens Friday, Dec. 13.

It is the latest release from Soulidifly, a small but burgeoning Richmond movie production and publishing company.

Picked up by a major distribution company, Lionsgate, the film starring London actor David Gyasi as the hero, will open in a few select theaters in New York, Los Angeles and other big markets well outside Richmond and on video on-demand sites such as Apple and Xfinity, according to B.K. Fulton, Soulidifly’s president.

“It will be available on every site worldwide,” said Mr. Fulton, whose company is based in a sixth-floor apartment in Shockoe Slip.

For the two-year-old local studio and for writer-director Wes Miller, this is another opportunity to bring to light a story about a black person who made a positive difference, but has never receive appropriate recognition.

“We want to tell meaningful, well-written stories” that can fire the imagination and inspire people, said Mr. Fulton, 53, who launched the studio in 2017. He was previously president of Verizon Virginia and Verizon West Virginia and retired from the company as vice president of the Mid-Atlantic Region.

Mr. Fulton said he and the creative team he leads jumped at the opportunity to tell the story of Mr. Reeves, the first black U.S. deputy marshal west of the Mississippi after Mr. Miller brought it to them.

During a storied 32-year career before his death in 1910, Mr. Reeves is credited with capturing more than 3,000 murderers, robbers, thieves and other felons who roamed Oklahoma, Arkansas and Texas. Never injured, he brought some prisoners to Detroit, where the Lone Ranger radio show originated in 1925.

Mr. Reeves’ derring-do as an investigator led at least one biographer to suggest, though without any direct evidence, that the show’s creators might have used the folklore about the lawman to create the Lone Ranger.

Whatever the reality, Mr. Fulton and his associates are hoping the movie will be a breakout hit for the independent studio and that Lionsgate will be able to get it into more theaters in the coming months. Mr. Fulton said the release has been timed to pick up on the enthusiasm for the recently released film about slave liberator Harriet Tubman. The Bass Reeves film also will be in theaters by the deadline for consideration for an Academy Award.

Soulidifly has released three other profitable films, “River Runs Red,” “Atone” and “Love Dot Com.” That’s unusual for an independent filmmaker, Mr. Fulton said. While thousands of films are created each year, only 4 percent are picked up for distribution, he said.

The studio has two others awaiting release, “The Unity Ride,” about a trip two men take that follows a route for the Underground Railroad, and “1 Angry Black Man” that focuses on a student’s concerns about racism.

The studio also is in throes of creating SoulVision TV network with actor-director Tim Reid, who also operates a movie studio in Richmond. Already, Soulidifly has launched the free, online SoulVision magazine to tell positive stories.