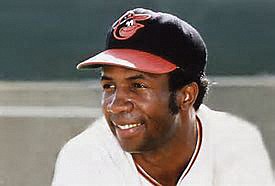 The world of baseball has lost a legend.

Mr. Robinson was the only player to win MVP honors in both the National and American Leagues, and became the sports’ first black manager.

He is survived by his wife, Barbara Ann Cole Robinson, and daughter Nichelle.

“Frank Robinson’s résumé is without parallel, a trailblazer in every since, whose impact spanned generations,” Baseball Commissioner Rob Manfred told the Los Angeles Times.

How it started: The youngest of single mother Ruth Shaw’s 10 children, Mr. Robinson was born in Beaumont, Texas. The family moved to Oakland, Calif., when he was a small child.

He possessed awesome power. On May 8, 1966, he became the first player to ever hit a home run completely out of Baltimore’s Memorial Stadium.

Mr. Robinson also drew notice on the base paths, stealing 204 bases. Within the rules, he was feared by infielders for his cleats-flying “take out” slides.

A 14-time All-Star, he was inducted into the Baseball Hall of Fame in 1982 in his first year of eligibility.

Upon his retirement, Mr. Robinson ranked fourth all time in homers, behind only Aaron, Babe Ruth and Mays. He is now 10th on the career list.

He was a rare “manager-player” in 1975. Filling in when needed, Manager Robinson played 49 games for the Indians, swatting nine homers. Dramatically, he slugged a home run in his first at bat as a manager-player.

Held in the highest esteem by players and owners alike, he later managed the San Francisco Giants, Baltimore Orioles and Montreal Expos. In all, he managed 2,241 major league games.

In 2003, Cincinnati dedicated a statue at Great American Ballpark.

In 2012, Baltimore unveiled a statue at Oriole Park at Camden Yards.

In 2015, Cleveland dedicated a statue at Progressive Field.