Hundreds turn out for equal rights 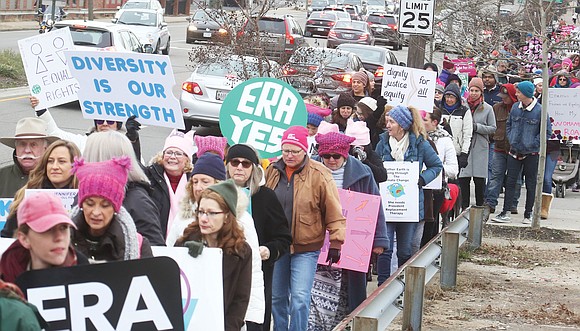 The march, a 2-mile reprise of last year’s event, began at the Arthur Ashe Jr. Athletic Center, with participants displaying brightly decorated signs as they walked the route to Broad Street and the Boulevard and returned to the Ashe Center.

“What do we want? Equal rights! When do we want them? Now!” demonstrators chanted in support of women’s rights and minority rights.

Demonstrators made their way back to the Ashe Center for an expo, where speakers urged reform, marchers danced to empowering music and dozens of vendors sold handmade products and spread awareness about various social justice issues.

“I often get asked, ‘Where is this surge of energy from women coming from?’ ” said Delegate. Jennifer Carroll Foy, D-Prince William County, who spoke at the expo. “I like to tell them, it’s always been in us.”

Delegate Carroll Foy sponsored legislation to ratify the Equal Rights Amendment, which would prohibit gender-based discrimination, in efforts to make Virginia the 38th and final state necessary to include the amendment in the U.S. Constitution.

The state Senate approved an ERA resolution Tuesday on a 26-14 vote; however the House of Delegates has yet to take up the resolution.

There is some debate, however, whether Virginia’s ratification of the ERA would make a difference because the amendment was passed by only 35 of the necessary 38 states by the 1982 deadline imposed by Congress.

“We now know we must have a seat at the table,” Delegate Carroll Foy said. “We have to be where the decisions are being made and where the laws are being written.”

“Every issue is a woman’s issue,” Sen. McClellan said. “We’ve had a long, complicated history. And now we fight and we march today to make sure our voices are heard.”

Rep. Spanberger thanked the work of “strong women” who helped send a total of 126 women to Congress as a result of the 2018 midterm elections.

“For anyone who needs something to show their daughters or young people or anyone else,” Rep. Spanberger said, “look at who’s in Congress. Look at what we have happening in Congress.”

Rep. Spanberger, a Democrat, beat incumbent Republican Dave Brat in one of Virginia’s most hotly contested races in November.

“We have women from all over the country,” Rep. Spanberger said of what is historically the most diverse Congress in history. Nearly a quarter are women.

“I love seeing women in power because I know that when my grandma was growing up, it wasn’t like that,” said 11-year-old Natalie Rodriguez, who participated in the march.

Several speakers also addressed immigrant rights, while others expressed frustration with the partial government shutdown, the longest in U.S. history. The shutdown began Dec. 22, and stems from President Trump’s stalemate with Congress over his request for $5.7 billion to build a U.S.-Mexico border wall.

This is the second year for the Women’s March RVA. This year, the National Women’s March will take place at 10 a.m. Saturday, Jan. 19, in Washington.