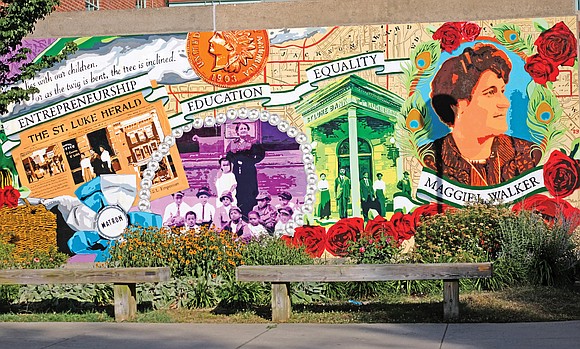 This dramatic mural graces the back entrance of Maggie L. Walker Governor’s School at Lombardy and Leigh streets. Artist Colleen Hall worked with students, school alumni and community supporters to create this tribute to the noted Richmond businesswoman for whom the school is named. Mrs. Walker created and opened a bank, a newspaper and a department store during her tenure as leader of the Independent Order of St. Luke, a fraternal insurance group. The building was named for her when it opened in 1938 as the city’s second high school for black students. The building has been the home of the regional high school that focuses on government and international studies since 2001. The mural faces Elizabeth Street.