VUU trounces Livingstone 44-0; heads to rumble in Pa. this Saturday

Traditionally, schools try and book a “sure win” for homecoming to please the returning alumni.

Not so this Saturday, Oct. 12, when the CIAA heavyweight Virginia Union University Panthers go up against Lincoln University of Pennsylvania for the Lions’ homecoming.

Last year at Hovey Field, VUU pounded the Lions 90-0 in one of the most one-sided contests in modern college football annals.

On paper at least, this weekend’s matchup could produce some of the same lopsided results.

VUU is a combined 12-3 under Coach Parker during the last two seasons and feeling very much like a CIAA championship front runner and NCAA playoff aspirant.

Meanwhile, Lincoln University is 0-5 this season and 10-75 overall since bringing back football in 2011.

VUU has defeated the Lions seven straight years after losing at Lincoln 19-10 in 2011. 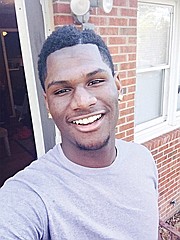 The Panthers are prohibitive favorites this week. They dominated on offense, defense and special teams in ending what had been a dream season for Livingstone College.

Morris, a former Thomas Dale High School standout who transferred to VUU from ASA College in New York, has been a steady beam of sunshine.

VUU began this season with a question mark at quarterback fol- lowing the graduation last May of standout, two-year starter Darius Taylor. But it has been a smooth transition. Morris has thrown for 1,017 yards, with 11 touchdowns and four interceptions.

Hall, from Trenton, N.J., has emerged as among the NCAA Division II’s most dangerous deep threats. The sophomore has averaged a whopping 26 yards for his 21 receptions with seven touchdowns.

VUU’s Tabyus Taylor rushed for 53 yards and one touchdown and caught an 18-yard pass.

Sterling Hammond, in search of yet another CIAA Defensive Player of the Year Award, led defensively with eight tackles. Brazilian-born kicker Jefferson Souza drilled three field goals. Souza has nailed 11 of 12 3-point attempts while averaging 62 yards on his kickoffs.

The Panthers return to Hovey Field on Saturday, Oct. 19 to celebrate their own homecoming against CIAA opponent Chowan University.

VUU will be the clear homecoming favorite for that game. The Hawks are 1-4 and coming off a 66-20 loss last Saturday at Fayetteville State University.

A note of caution regarding Lincoln University: The Lions showed some spunk last Saturday in its 26-19 loss in Charlotte, N.C., to Johnson C. Smith University.

The Panthers’ pass defense could be tested.

Prior to the competitive game at Johnson C. Smith, Lincoln had surrendered 201 points (50.2 average per game) in its previous four setbacks.

While Lincoln has struggled on the gridiron, the university has many noteworthy accolades. Lincoln is the nation’s first degree-granting HBCU to provide arts and sciences for black males.

Also, Fritz Pollard coached Lincoln football from 1918 to 1920 before going on to become first African-American coach on the pro level.

And Lincoln alumni Thurgood Marshall (Class of 1930) and Langston Hughes (1929) have had commemorative stamps issued in their honor by the U.S. Postal Service.