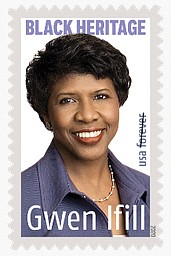 Pioneering journalist Gwen Ifill, the late anchor of the PBS “News Hour,” will be honored on a Forever stamp in 2020, according to an announcement Tuesday by the United States Postal Service.

The postage stamp, the 43rd in the USPS Black Heritage series, will feature a photo of Ms. Ifill taken in 2008 by photographer Robert Severi.

Ms. Ifill was the first African-American woman to co-anchor a national newscast and serve as solo anchor of a weekly national public affairs show.

“Among the first African-Americans to hold prominent positions in both broadcast and print journal- ism, Ifill was a trailblazer in the profession,” the USPS wrote in its announcement.

The New York City native started her career in journalism at newspapers in Boston and Baltimore. She later worked for The Washington

In 2013, she became a co-anchor with Judy Woodruff of “News Hour,” and covered eight presidential campaigns and moderated two vice presidential debates.

The Gwen Ifill stamp was un- veiled Tuesday along with more than 15 others that will debut next year. Among them will be stamps celebrating hip-hop, the U.S. Constitution’s 19th Amendment guaranteeing women the right to vote and “Voices of the Harlem Renaissance.”