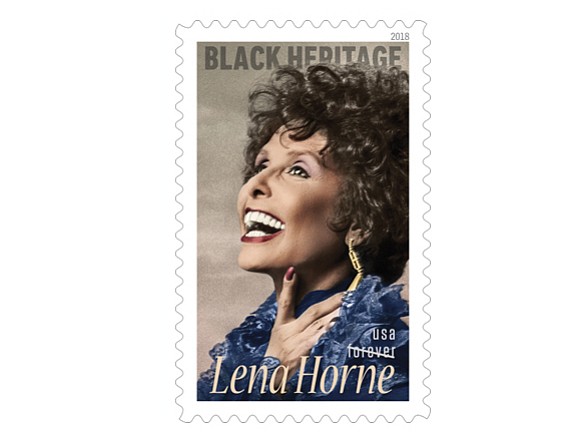 Lena Horne, the late great dancer, singer and Hollywood actress who fought for civil rights, is featured on a new stamp issued Tuesday by the U.S. Postal Service.

Ms. Horne, who died in 2010, is the 41st person to be celebrated in the Black Heritage stamp series, the Postal Service stated.

“Today, we honor the 70-year career of an American legend,” Deputy Postmaster General Ronald Stroman said in dedicating the stamp in New York, her birthplace.

“With this Forever stamp, the Postal Service celebrates a woman who used her platform as a renowned entertainer to become a prolific voice for civil rights advancement and gender equality.”

Born in 1917, Ms. Horne began her career as a dancer at the Cotton Club in Harlem and then sang with touring bands.

By 1941 amid the era of segregation, she helped break the color line in Hollywood by signing a long-term contract with MGM Studios. She was best known for her starring roles in “Cabin in the Sky” and “Stormy Weather.”

She also entertained servicemen during World War II, and after the war worked with First Lady Eleanor Roosevelt in pressing for anti-lynching laws and policies. She also fought discrimination against Japanese-Americans.

During the 1960s, the outspoken entertainer performed at civil rights rallies and participated in the 1963 March on Washington in seeking to advance the cause.

A three-time Grammy Award winner, Ms. Horne also was honored for her work to end racial bigotry and injustice with the national NAACP’s Spingarn Medal in 1983 and inclusion in the International Civil Rights Walk of Fame at the Martin Luther King Jr. National Historic Site in Atlanta.