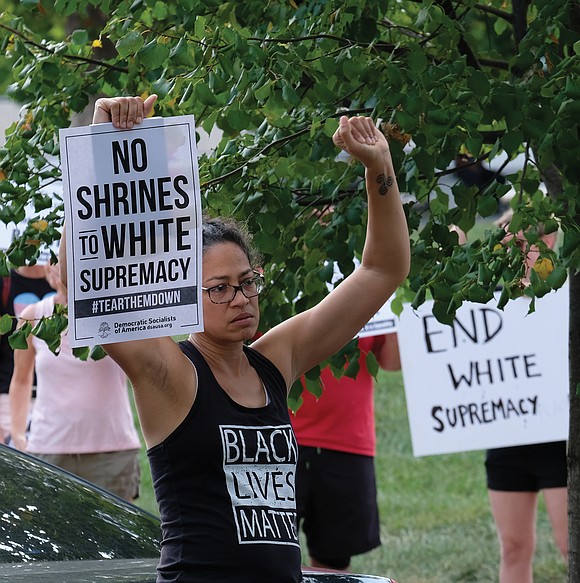 Black Lives Matter activist Jalene Schmidt takes part in a protest last Sunday outside the national headquarters of the United Daughters of the Confederacy on Arthur Ashe Boulevard as the slavery-defending organization marks its 125th year. Ms. Schmidt of Charlottesville was among 30 protesters holding up signs to passing motorists with such slogans as “No Shrines to White Supremacy” and “End White Supremacy.” The Virginia Defenders for Freedom, Justice & Equality, a 17-year-old progressive group based in Richmond, organized the protest based on an assessment that the UDC has arguably done the most “to promote the false ‘Lost Cause’ mythology of Confederate nobility, sponsor and defend statues to the Southern rebels who fought for slavery and block school textbooks that accurately cite slavery as the primary cause of the Civil War.”

Black Lives Matter activist Jalene Schmidt takes part in a protest last Sunday outside the national headquarters of the United Daughters of the Confederacy on Arthur Ashe Boulevard.