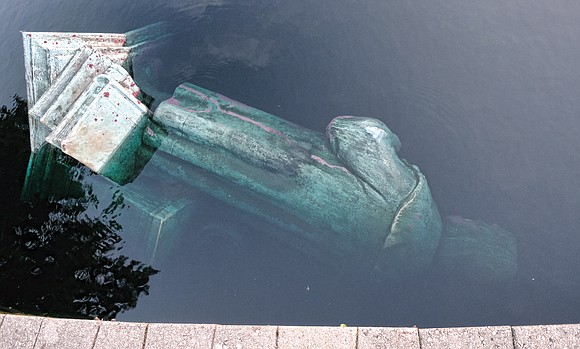 The statue of Christopher Columbus floats in Fountain Lake after it was knocked down Tuesday night following a protest where the statue stood for decades at Byrd Park. Photo by Sandra Sellars

The Columbus statue in Byrd Park was brought down with ropes, briefly set on fire and dragged into Fountain Lake on Tuesday evening following a protest and march down Arthur Ashe Boulevard led by members of Richmond’s indigenous community.

During a a peaceful protest in Byrd Park, demonstrators reaffirmed a commitment to inclusivity and solidarity with all marginalized and oppressed peoples.

“We no longer leave behind people in this movement,” said Joseph Rogers, a member of the Virginia Defenders for Freedom, Justice & Equality.

Around midnight, the words “BLM” for Black Lives Matter and “This is Powhatan Land” were projected in the spot where the Columbus statue stood.

The statue was fished out of the lake on Wednesday morning and hauled off under the eye of city workers.

Columbus has long been a contentious figure in Richmond, with the city refusing to recognize the Columbus Day holiday in October by keeping City Hall open even as federal and state offices are closed.

The toppling of the Columbus statue followed the toppling Sunday evening of the Wickham statue from its pedestal in Monroe Park.

That statue was one of the few remaining landmarks in Monroe Park following decades of change, including a recent two-year redevelopment of the park. It once served as an instructional camp and a military hospital for Confederate soldiers during the Civil War. 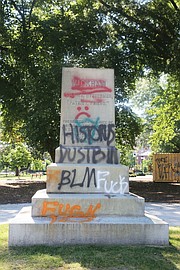 Above, the graffiti-tagged pedestal is all that remains where the statue of Confederate Gen. Williams Carter Wickham once stood in Monroe Park. Protesters pulled down the statue Saturday night. The Virginia National Guard reportedly now has it.

A stone cross honoring Confederate Gen. Fitzhugh Lee, a former Virginia governor and the nephew of Robert E. Lee, and a monument to newspaper publisher Joseph Bryan, an industrialist and supporter of the Lost Cause narrative, remain in the park.

This is not the first time in recent years that people have objected to the presence of the Wickham statue. In the wake of the deadly white supremacist rally in Charlottesville in 2017, two descendants of Mr. Wickham, Clayton and Will Wickham, called on Mayor Levar M. Stoney and Richmond City Council to remove the statue memorializing a man who, as they wrote in a letter, “unapologetically accrued power and wealth through the exploitation of enslaved people.”

The Wickhams also met and discussed the matter with Alice Massie, president of the Monroe Park Conservancy group that led the renovation of Monroe Park.

Currently, no announcements have been made about the future of these monuments.

The choice to dump the Columbus statue in the lake seemed inspired by similar actions in England, where a statue of 17th century slave trader Edward Colston was pulled down by anti-racism protesters in Bristol on Sunday before being thrown into Bristol Harbour.

A petition is calling to put in its place a statue of Paul Stephenson, a youth worker who organized a Bristol bus boycott in 1963 — inspired by the 1955 Montgomery, Ala., bus boycott spurred by Rosa Parks — that helped to end an illegal employment color ban in the local bus companies.