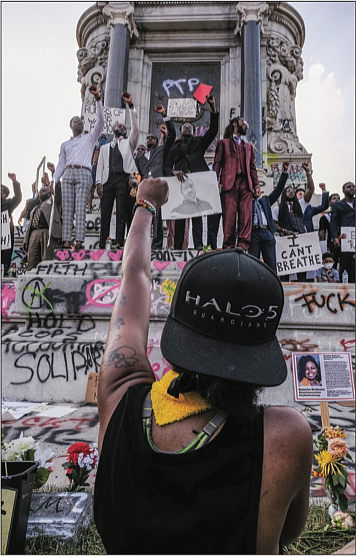 But even as two City Council members added proposals to change the slavery-defending Confederate names of Jefferson Davis Highway and the Robert E. Lee Bridge, the council quietly was being reminded that removing the city-owned Confederate statues could require General Assembly help to dismantle a legal barrier.

The legal complications that have halted the state’s plans for quick removal of the Lee statue on Monument Avenue also could interfere with the city’s efforts to remove its statues.

The Free Press has learned there is a behind-the-scenes effort to get rid of the legal barrier.

That barrier is a line in the City Charter — the city’s constitution — that makes it a duty of the city Planning Commission to “preserve historical landmarks.” Virtually every one of the statues targeted for removal is listed on the state and national registers of historic sites and places.

Despite a new state law approved by the General Assembly this year that allows localities to decide what to do with their Confederate statues as of July 1, the Richmond charter provision appears to dictate any action for now.

At least that was the 2017 opinion of then-City Attorney Allen L. Jackson.

Mr. Jackson also counseled that more research was needed to ensure there are no deed restrictions requiring perpetual maintenance when the city took possession of the Monument Avenue statues of J.E.B. Stuart, Jefferson Davis, Thomas “Stonewall” Jackson and Matthew Fontaine Maury in the early 1900s.

The current city attorney, Haskell C. Brown III, did not respond to a request for comment on his view of the charter language.

Sources told the Free Press discussions are underway with members of the Richmond delegation to the General Assembly on legislation to amend or eliminate the words about preservation and to clear any other problems, such as voiding deed restrictions.

In addition, the sources said proposals are in the works to have council endorse General Assembly action to eliminate the charter language, with the possibility that the legislature could vote on such a charter-change measure at a special session this summer.

Dr. Jones and Mayor Levar M. Stoney announced last week that they would introduce legislation on July 1 to take advantage of the new state law. The mayor has said he wants the changes to go beyond Monument Avenue.

Dr. Jones said he is on board with removing a statue of Confederate Gen. A.P. Hill at Hermitage and Laburnum avenues in North Side, the Confederate Soldiers and Sailors Monument in Church Hill and other Confederate items that need to be eliminated.

Impatient demonstrators did not wait for legal niceties to topple the statues of Confederate Gen. Williams C. Wickham, an area slaveholder who fought in the Civil War and would go on to become a local leader in railroad development, and Christopher Columbus in Byrd Park.

The Wickham statue was brought down on Saturday night. The removal Tuesday evening of the Columbus statue reflected the protesters’ view that he is to be disdained for unleashing the European holocaust on natives in the Caribbean and in what is now the United States. The City of Richmond long ago stopped celebrating Columbus Day, and last year joined other localities in renaming the October holiday Indigenous Peoples Day.

Meanwhile, 5th District Councilwoman Stephanie A. Lynch introduced a resolution Monday that would authorize the Stoney administration to begin the renaming process for the Lee Bridge. The resolution is to be heard in the Land Use, Housing and Transportation Committee next week.

Separately, 8th District Councilwoman Reva M. Trammell on Tuesday submitted a request for a resolution to rename the South Side section of U.S. 1 known as Jefferson Davis Highway. She wants the street to be renamed Richmond Highway.

The resolution to start the renaming process is now in the hands of the Mr. Brown’s office, with expectations it will be introduced at the next council meeting on Monday, June 22.

“I’ve talked with the merchants along the street, and they understand why it is needed and why it should be done,” said Ms. Trammell, who has been motivated by the demonstrations occurring mainly north of the James River. “They just want peace and don’t want their windows smashed and their stores looted, and if this is what it takes, they are behind it.”

The proposal is endorsed by the Jefferson Davis Neighborhood Civic Association, led by Charles Willis, and the Richmond Branch NAACP.

Still, demonstrators are keeping up the pressure, with raucous but peaceful marches for change, such as creation of a civilian oversight board for Richmond Police. Early Wednesday afternoon, nearly 100 people marched along Franklin Street to the State Capitol, chanting and holding up signs criticizing police, urging racial justice and promoting Black Lives Matter.