Pope Francis preaches message of peace, care of the sick and environmentalism during 3-nation visit to Africa 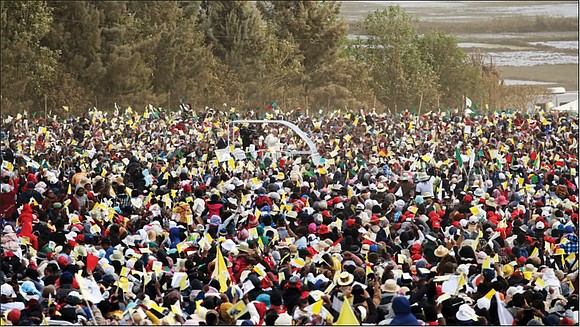 Pope Francis, background center, is cheered by a crowd of faithful last Sunday as he arrives in the popemobile to celebrate Mass in Antananarivo, Madagascar. The pope was in Madagascar for the second leg of his weeklong trip to Africa.

Pope Francis greeted packed stadiums full of celebrating locals and spoke to crowds numbering up to 1 million people in Madagascar, the second stop on his weeklong, three-nation trip to Africa.

In Madagascar, where he reached out to people over the weekend, he was embraced by many of the country’s youths, who traveled and waited for hours to catch a glimpse of him during his trip to the country.

But while the pope’s visit to Mozambique, Madagascar and Mauritius was buoyed by an optimistic message of peace and faith, the realities he addressed at nearly every stop weighted his speeches and meetings with concerns about climate change, poverty and other issues.

In the capital of Madagascar, Antananarivo, last Sunday, Pope Francis called on local authorities to take more responsible care of the planet’s resources for the good “not only of present generations, but also of those yet to come,” he said.

Deforestation in Madagascar has become an increasing concern as a growing portion of its biodiverse forests are cut down and burned to leave way for cattle and farmland. According to photographic evidence, more than half of the forest in Madagascar has been lost since 1950.

The care of the environment, especially forests, is particularly important for this pontificate. Following the release of his encyclical on the environment in 2015, Laudato Si, he called a synod specifically to discuss the spiritual and environmental needs of the Amazon forest, for which the world’s bishops will come to Rome in October.

Beyond the quickening depletion of the country’s resources, the citizens of Madagascar also face crippling poverty levels that leave 75 percent of the population living on less than $2 a day, according to the World Bank.

During a vigil at the Soa Mandrakizay field last Saturday, Pope Francis encouraged the thousands of young people to continue moving forward despite the challenges of day-to-day survival and despite social injustice and instability.

Some may be “tempted to give up,” the pope said, adding hat the devil often reminds us of our sins and imperfections to make us feel like “however much we do, nothing can ever change, everything will remain the same.”

But God, Pope Francis said, “wants you to share all your gifts and charisms, all your dreams and your talents.”

The pope was met with massive enthusiasm at every stop during the second leg of his trip to Africa, and the young people who gathered for the vigil made every effort to embrace and touch the pope when he threw himself into their midst.

The pope went to the island nation of Mauritius on Monday, the last stop of his trip before returning to the Vatican on Tuesday, Sept. 10.

During the pope’s first stop last week in Mozambique, drumming, dancing and singing erupted from the Zimpeto Stadium in the peripheries of Maputo on Friday when Pope Francis reminded the more than 40,000 people present that “you have a right to peace!”

He called for peace and beseeched the crowd to care for the sick and the marginalized among them.