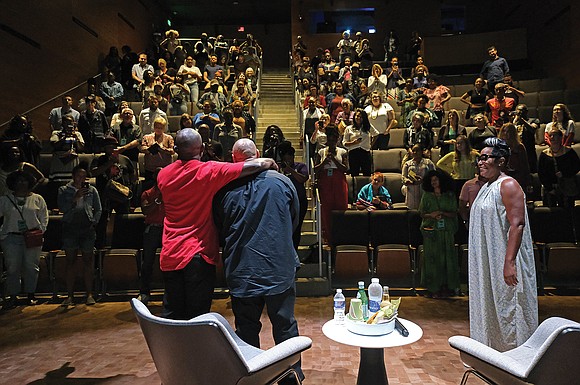 The audience at the Afrikana Independent Film Festival gives a standing ovation last Saturday to Raymond Santana, center, after the screening of the documentary “The Central Park Five.” Mr. Santana, who was exonerated in the case after spending five years in prison, talked about his experience following the film. He is embraced by Todd Waldo, adviser for the film festival, while moderator Zoe Spencer, a sociology professor at Virginia State University, looks on. Photo by Sandra Sellars

Then Raymond Santana, one of the niw Exonerated Five, entered the Richmond theater and the audience stood on their feet, giving Mr. Santana, 44, a standing ovation and thunderous cheers.

Mr. Santana was in Richmond last Saturday for a screening of the documentary at the Afrikana Independent Film Festival at Virginia Commonwealth University’s Institute for Contemporary Art.

His message was clear: You have to fight the powers that be.

More than a decade after their arrest and incarceration, the five men were exonerated by DNA evidence.

Mr. Santana, Yusef Salaam, Korey Wise, Kevin Richardson and Antron McCray, who were ages 14 to 16 when they were arrested, spent from five to 13 years in prison before a serial rapist confessed to the crime.

The Exonerated Five later received a $41 million settlement in their civil suit against New York City officials for malicious prosecution.

Mr. Santana told the audience his mission is “to educate the next generation about inequities in the criminal justice system and the importance of social justice.”

“We (the five exonerated men) have been fighting against the system for over 30 years now. It’s not that simple. And when you start to get your voice back, you start to understand you have a platform,” he said.

Mr. Burns’ two-hour documentary, released in 2012, chronicles the horrific crime, the rush to judgment by the police, a media clamoring for sensational stories without independent investigation, an outraged public and the five lives upended by the miscarriage of justice.

The film exposes racial hatred and panic racism as New York City was recovering from a series of crises in the 1970s and the crack epidemic hit in 1984, fueling a surge in homicides, robberies and other crimes.

“In 1990 we were considered probably the most hated people on planet Earth,” Mr. Santana told the audience.

None of the five teens knew each other at the time of their arrest, he said. However, after they were exonerated, a close bond has been forged as adults. Mr. Santana lives in Atlanta, just minutes from Mr. McCray, whom he said he speaks with on the phone every day. Mr. Salaam also lives in Georgia.

The five maintain a brotherhood to help overcome the trauma they experienced being incarcerated as youths. Mr. Wise, who was the oldest at 16, was imprisoned in an adult facility. They are not afraid to tell their stories in depth because they want young people and their parents to understand their rights, including Miranda rights, and the need for a lawyer when being questioned by the police, Mr. Santana said. He noted that police often abuse young people and coerce them into confessions after an arrest, as was the case with the Exonerated Five.

One of the contemporary tools Mr. Santana uses to get that the truth out is social media. At the time of their arrest, he said, daily newspapers, TV news broadcasts and courtroom sketches, which he said darkened their features, made them look guilty.

Now a fuller story of what happened to them is gaining wider public attention through Mr. Burns’ documentary and the Netflix series, “When They See Us,” which was co-written and directed by Ava DuVernay.

Mr. Santana said educating young people is critical. “Even today, the system wants our child to not occupy a classroom but a jailhouse. It is all about budgets. The more people you have in jail, the bigger the budget. It is all about the money.”

Mr. Santana’s journey made him question his belief in a higher power.

“Even though I question the man upstairs, I didn’t really lose faith. It just gets tested,” Mr. Santana said. “I think I received blessings from the man upstairs. My daughter was one of them. After having her, I made a pact with Him to follow whatever direction my life would take.”

Tina Barr, who earned a master’s degree from VCU and now is a Ph.D. candidate in social work at the University of Minnesota who studies wrongful conviction, said she was glad Mr. Santana gave the after-story that was not in the documentary.

“I think everyone needs to hear these stories of injustice, which could happen to teenagers even today,” Ms. Barr said following the program.

“If younger people understand what’s happening in the justice system, they can be instrumental in making it such that those types of injustices will not happen to other people. They will be social justice activists, not just bystanders.”