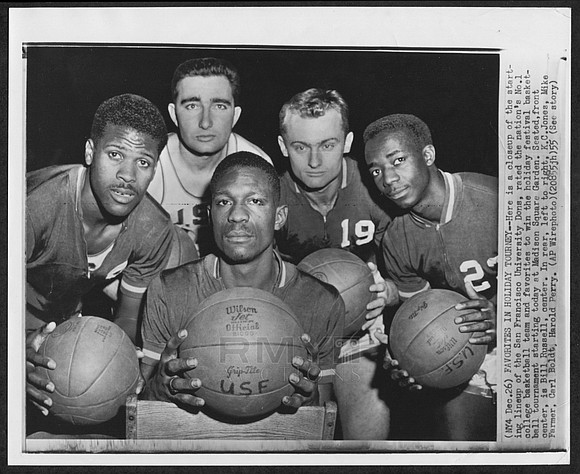 During NCAA basketball’s early years, there was a “gentleman’s agreement” not to play more than two African-American players at a time.

Fortunately, not everyone shared that same bigoted mindset.

The University of San Francisco Dons broke that “rule” and, not coincidentally, proceeded to win the NCAA championship. In fact, the Dons won a pair of NCAA championships – in 1955 and 1956.

The University of San Francisco, under Coach Phil Woolpert, ranks with the most dominant repeat acts in hoops annals. The Dons were 28-1 in 1955 and 29-0 in 1956, at one point winning 55 straight games over two seasons.

Rarely were games close. USF defeated LaSalle University in the 1955 final by 14 points and the University of Iowa in 1956 by 12 points.

Unfortunately, it wasn’t always a smooth ride off the floor. On a trip to Oklahoma City in 1954 for the All College Tournament, the team’s hotel denied lodging to the African-American players. In a show of unity, all the players – African-American and white players alike, along with the coaches – camped out at a nearby college dorm.

Russell, who went to USF from McClymonds High School in Oakland, Calif., was remarkably fast and agile for a man his size. Also excelling in track and field, he had personal bests of 49.6 seconds in the 400 meters and 6-91⁄4 in the high jump.

The winning ways were far from over. Both Russell and Jones went on to spearhead one of the greatest dynas- ties in pro sports history with the NBA Boston Celtics, capturing nine titles from 1957 to 1966.

Perry would go on to play briefly for the Harlem Globetrotters before returning to UCF to pursue a law degree.

USF’s decision to place talent above skin color couldn’t have been more successful.

Both Russell and Jones are members of the Naismith Memorial Basketball and College Basketball halls of fame. Also, they were teammates on the 1956 U.S. Olympic team that won the gold medal in Melbourne, Australia.

Soon after USF’s back-to-back titles, other schools around the nation washed their hands of the “gentleman’s agreement.”

No school has ever dominated college hoops like UCLA during the Coach Johnny Wooden seasons from 1964 to 1975. The Bruins won 10 titles during the 12 seasons, with a cast brim- ming with African-American talent.

Bill Walton, Sidney Wicks, Jamaal Wilkes and Lucious Allen. All but Meyers and Walton are African-American.

Texas Western, now the University of Texas- El Paso, took it to another level in 1966. The Miners started five African-American players in defeating the all-white University of Kentucky team in the NCAA final at Cole Field House in College Park, Md.

Time had run out on racial prejudice. The “two black max” rule had been laid to rest.

Schools winning NCAA Division I championships back to back:

Note: 2019 NCAA champion University of Virginia was denied – at least for now – the opportunity to repeat winning the crown because the tournament was scratched because of the coronavirus. The Cavaliers would be eligible to repeat in 2021 because no champion will be crowned in 2020.