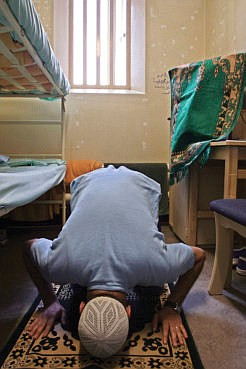 A Muslim prisoner prays inside his cell. Photo by Andy Aitchison/Prison Image/Creative Commons

A coalition of 20 faith groups is pressing prison officials across the country to accommodate all prisoners’ religious needs during the outbreak of the coronavirus, particularly with Ramadan beginning this week.

“Prisons remain under an obligation to accommodate religious practice to the maximum extent possible, even as they act to mitigate the health crisis,” reads the letter that was sent to administrators of all federal and state prison systems. “We remain deeply concerned that pris- ons will use this crisis as an excuse to deny basic religious accommodations to prisoners in their care.”

The letter, sent by the civil rights group Muslim Advocates, was signed by the Evangelical Lutheran Church in America, the National Council of Churches, the Unitarian Universalist Association, the Reconstructionist Rabbinical Association and other faith-based organizations.

While the groups argue for the release of as many prisoners as possible to mitigate the health crisis, they said prison administrators’ obligation to accommodate all prisoners’ religious practice — enshrined into law by the Religious Land Use and Institutionalized Persons Act, passed by Congress in 2000 — is more critical than ever.

“Maintaining the ability to practice one’s faith is particularly important during the current crisis, as people are forced to confront potential exposure to a deadly illness, the possible suffering and mortality of sick loved ones and acquaintances, and greater social isolation and economic hardship,” the groups wrote.

The groups stated access to religious diets, religious articles, worship services and spiritual counselors is at risk of being denied during the pandemic, as are special accommodations required for Muslims observing Ramadan.

The holy month, marked by dawn-to-sunset fasts every day, will begin on Friday, April 24. The groups have asked prison administrators to provide adequate meals and any necessary medication outside of daylight hours, and that officials accommodate the additional taraweeh evening prayers.

In Virginia prisons, Muslims have alleged they were not served breakfast before sunrise and received their dinner meals late during Ramadan. Some immigration detainees have said they have been arbitrarily denied placement on a “Ramadan list,” which they must be included on in order to fast, and have been denied prayer rugs, copies of the Quran and halal meals. Others have said they were served leftover meals that were cold or rotten after sitting for hours out in the open.

Areport published by Muslim Advocates last year found that Muslim prisoners are significantly overrepresented in state prisons. About 9 percent of the total state prison population in the United States is Muslim, while only about 1 percent of U.S. residents are Muslim. About 12 percent of federal prisoners self-identify as Muslim. Experts note the vast majority of incarcerated Muslims in the United States turn to the Islamic faith during their incarceration.

“We have a duty to protect our most vulnerable citizens, and that includes the incarcerated,” Muslim Advocates staff attorney Matt Callahan said at the time. “Without immediate action, prisons and jails can become virus tinderboxes that threaten the lives and well-being of everyone inside, as well as the community at large.”