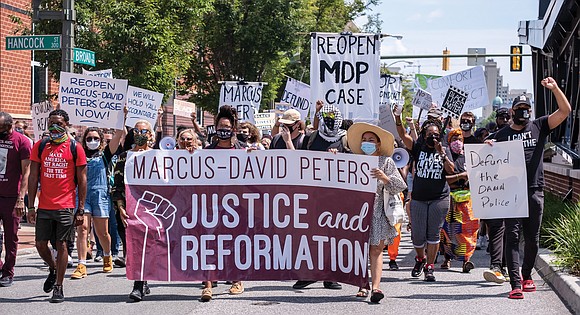 Marchers call for reopening the investigation into the 2018 fatal police shooting of Marcus-David Peters in Richmond during its march along Broad Street toward the legislative session at the Siegel Center. the state Senate is meeting at the Science Museum of Virginia. Photo by Sandra Sellars

Will parents get a state tax credit for shelling out money for essential child care so they can keep their jobs as Henrico Republican state Sen. Siobhan S. Dunnavant has proposed?

Will police officers and their localities be stripped of immunity against lawsuits alleging violations of constitutional rights or unlawful actions that cause injury or death as Richmond state Sen. Joseph D. Morrissey and Delegates Jeff M. Bourne of Richmond and Jay Jones of Norfolk have proposed?

Those items are among the wave of legislation up for consideration at a special session of the General Assembly that opened Tuesday and will focus largely on budget issues related to the pandemic and criminal justice reform.

Among the proposals are bills that would require every Virginia locality to create a civilian oversight board to handle complaints of police abuse and misconduct, create uniform training standards for police, enable the state to cancel certifications of officers proven to have broken the rules or used excessive force and direct two agencies to create emergency teams of mental health professionals and law enforcement to respond to individuals experiencing a mental health crisis.

Other legislation calls for allowing parents primarily of special needs children whose public schools have gone virtual to receive a portion of the funds the state contributes to each child’s education to enroll their children in other educational programs.

Also high on the agenda is the repair of the two-year state budget, which is projected to shrink $2.7 billion based on the impact of COVID-19.

The legislature in April agreed to a halt for now $2.2 billion in spending, including pay hikes for teachers, state workers and home health workers and tuition relief for college students. But leaders in the legislature want to take another look and consider changes.

Deserting the cramped State Capitol because of the need for physical distancing during the pandemic, the 40-member state Senate is ensconced during the special session at the Science Museum of Virginia at 2500 W. Broad St.; the 100-member House of Delegates began its session 12 blocks east at Virginia Commonwealth University’s Siegel Center at 1200 W. Broad St.

Hundreds of people engaged in a series of rallies and marches outside the two venues during the opening day, advocating for causes ranging from boosting school funding to establishing the Marcus Alert System for mental health crises involving police response, reforming police and defunding law enforcement to supporting 2nd Amendment gun rights. 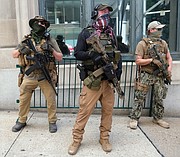 The session also began with an unusual twist, news that veteran Democratic Portsmouth State Sen. L. Louise Lucas had been charged with two felonies in her hometown related to the toppling of a Confederate statue in that Hampton Roads city.

As president pro tempore of the state Senate, Sen. Lucas is the highest ranking Black legislator in the General Assembly’s upper chamber outside of Lt. Gov. Justin E. Fairfax, who serves as the Senate president.

Still, with so much on their plate, the special session’s start was less than auspicious. Instead of addressing the stack of legislation, lawmakers spent much of the first day setting the rules for the session.

In the House, where Democrats hold a 55-seat majority, Speaker Eileen Filler-Corn led a successful effort Tuesday to create a virtual session during this time of COVID-19 that will allow the delegates to participate from their homes or offices and avoid face-to-face meetings.

Overriding Republican dissent, the Democratic majority followed up Wednesday by voting to change the rules to allow the virtual session and delaying the start of committee work on bills and resolutions until Monday, Aug. 24.

Meanwhile, the Senate where Democrats hold a 21-19 seat majority, declined to go virtual, agreeing with Democratic Majority Leader Richard L. “Dick” Saslaw that masks and social distancing were sufficient for their session.

Senate committees started reviewing legislation on Wednesday, with sessions livestreamed and the public allowed to sign up to offer comments.

Before the session convened, Gov. Ralph S. Northam advised senators and delegates that he would seek to their approval for legislation to make it easier for people to vote early rather than crowding the polls on Election Day.

The proposals he presented would allow local voter registrars to set up boxes or collection points for voters to deposit mail ballots. Richmond offered the service during the primary election in June; this would ensure that election operations across the state could provide a similar service.

Gov. Northam also is asking the legislature to provide $2 million for the state Department of Elections to cover the postage of providing voters with prepaid envelopes to return their ballots.

He also wants the legislature to approve a change in the state’s election law to provide voters with a means to correct a mailed-in ballot.