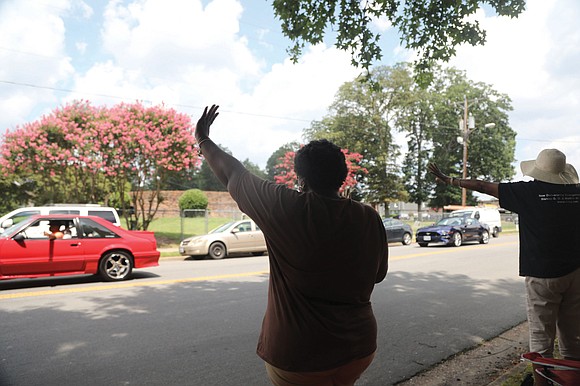 Sonya Beaver, 50, left, waves with her mother, Helen Beaver, 78, as a U.S. Census parade passes by on Clarkson Road in South Side on Saturday. The parade, featuring cars and motorcycles from the Victory 7 Mustang Club and the Buffalo Soldiers Motorcycle Club, was to encourage city residents to complete and return their census forms. Photo by Regina H. Boone

But confirmation of the population growth is proving difficult as too many Richmond residents are failing to participate in the 10-year national population count that will actually determine the number of people living in Richmond and localities across the country.

As of July 16, the Census Bureau reported that only 57.2 percent of the estimated 90,000 households in Richmond had taken part in the count. That’s nine percentage points below the 66 percent participation rate for households statewide.

At the time, Richmond ranked 92nd for census participation among Virginia’s cities, counties and towns. That ranking was the third lowest among the 14 localities in the Richmond-Petersburg metro area, with only Hopewell and Petersburg doing worse.

The state capital’s low level of participation reflects the struggle the census is facing to get the count completed by the end of the year. Already, there is concern that the Census Bureau will use inaccurate estimates to try to finish on time – virtually ensuring an undercount, according to experts in the field.

Seeking to pump up interest in the count, census officials ignored the brutal heat and led a vehicle parade Saturday through African-American and Latino neighborhoods in South Side, North Side and the East End.

The purpose: To encourage people to complete their census form and ensure the city gets its full share of state and federal funding that is based on the census count.

The federal government relies on the 10-year count to distribute funding for everything from public schools and public transit to social services and is the primary information used to draw new election districts for City Council and the School Board as well as for General Assembly and congressional offices.

According to the newly released census estimate, Richmond had 230,436 people living within its 60 or so square miles in 2019, the most since around 1975.

The last census showing more than 230,000 people was taken in 1970 when nearly 250,000 people were counted after a controversial annexation of a portion of Chesterfield County — a number that quickly began falling.

The latest estimate represents a 1 percent increase from July 2018 when the city’s population was estimated at just more than 228,000 people. Richmond’s population bottomed at around 197,000 people in the 1990s and has been growing ever since. Since 2010, when the Census counted 204,375 residents, the Census Bureau estimates the city has added 26,000 residents, an increase of 12.8 percent.

Latinos represent about 6.7 percent of the city’s population and Caucasians 40 percent, with the balance being mostly Asians or those reporting two races.

Despite the population growth, the Census Bureau continues to estimate that one in four Richmond residents live in poverty.

In the metropolitan area, Chesterfield County continues to be the population leader. The Census Bureau estimated Chesterfield added about 4,300 new residents since July 1, 2018, to push its population to a new record of 352,802 as of July 1, 2019.

The bureau notes that Chesterfield County is increasingly diverse, with one in four residents being African-American and one in 10 being Latino. About 60 percent are Caucasian.

Henrico County’s population growth rate continues to trail Richmond and Chesterfield. The latest census estimate suggests Henrico added about 1,560 people in the past 12 months, bringing the county’s population to 330,818, also a new record.

Between 2010 and 2019, the Census Bureau estimates Henrico’s population has grown 7.8 percent, compared with 11.6 percent for Chesterfield and 12.8 percent for Richmond during the same period.

Henrico County also has seen increased diversity, according to the Census Bureau. Caucasians make up 52 percent of Henrico’s population and African-Americans 30 percent. Of the remainder, about 10 percent are Asian and about 6 percent are Latino, according to the bureau’s data, with other ethnic and racial groups making up the rest.