Richmond’s population grew by 11 percent, according to the 2020 U.S. Census. But the number of city residents who identify solely as Black slides, while the white population rises slightly. 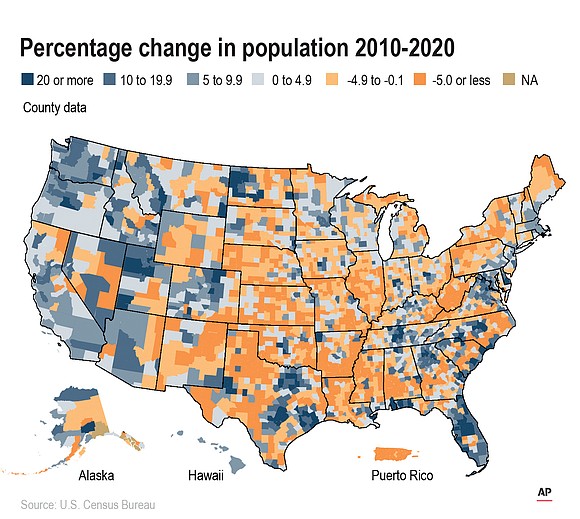 A map of the United States and Puerto Rico shows the percentage change in population from 2010 to 2020. Map from F. Duckett/Associated Press

The 2020 U.S. Census did not surprise anyone when it confirmed what everyone can see with their own eyes— Richmond’s population is on the grow.

According to census results released Aug. 12, Richmond’s population jumped 11 percent to 226,610 men, women and children in the past 10 years, the biggest increase in at least four decades.

But there was a startling change in the information on race. That data showed a continuing decline in the number of people in the city self-identifying solely as Black. Although Richmond remains a majority-minority city, only 40 percent of those who participated in the count self-identified as Black, the smallest percentage in at least a half-century. That’s a big change from the 2000 Census when 57 percent of the population self-identified as Black and 2010 when 50 percent did.

People self-identifying as white outnumber those who self-identify as Black for the first time since 1970, when Richmond’s annexation of a part of Chesterfield County kept the city from having a Black majority.

However, another set of data suggests that it is the self-identification that has changed. A record number of city residents self-identified as multiracial, or checked “other” on the census form, as was the case across the state and the nation.

In Richmond, nearly 31,000 people identified either as multi-racial or as other race, which is nearly triple 2020 when only about 12,000 residents checked either multiracial or other in responding to the question about race.

That, too, is a big change for a city and state that has a long history of counting people as Black if they had the slightest relationship to someone who is Black, the so-called “one drop” rule.

Based on the data, more people appear to have opted to provide a more nuanced portrayal of their race after the Census Bureau provided more options.

Another startling statistic is the growth of those who identify as Hispanic or Latino. In 2020, nearly 24,000 people included that ethnic identifier in their census response, which is nearly double the 12,803 city residents who did in 2010 and nearly five times the 5,074 people who did in 2000. People identifying as Hispanic or Latino represent 10.5 percent of the current city population. Their numbers contributed to about half the city’s population growth in the past 10 years. The current percentage represents a considerable jump from 2000 when only 2.6 percent of city residents included that ethnic identification in their response.

Those identifying as Hispanic or Latino also comprise about 10.5 percent of the total population of Virginia.

Another surprise is that the Richmond failed to reach the 230,000-population level as anticipated. Both state and federal demographers had issued pre-Census estimates last year suggesting that the city’s population was around 230,000 residents.

The official count indicated that Richmond added 22,396 people from 2010 when 204,214 people were counted. The new total of 226,610 is about 4,000 people fewer than estimates Richmond has embraced in its planning documents.

The official count is important as it is used in determining the division of trillions of dollars in federal grants and payments for a wide array of programs and for redrawing election district boundaries for the U.S. House of Representatives and the state Senate and House of Delegates and for local elective offices.

It remains to be seen how much the change in demographics will affect City Council’s redrawing of election districts in Richmond.

Richmond, though, grew at a faster clip than Henrico County, which gained only 6 percent in population to reach 334,389 residents, up 27,454 residents from 2010.

The city’s pace, however, trailed that of Chesterfield County, whose population jumped 15.2 percent to reach 364,48 people, up 48,312 residents from 2010. For both counties, the growth percentages were the smallest in 40 years.

Both neighboring counties became more diverse, most notably in Henrico County. Only 51 percent of the population self-identified as white non-Hispanic, according to the census, possibly the lowest percentage of white people since post-Civil War.

Nearly 30 percent of Henrico’s population identified as Black, nearly 10 percent percent as Asian, with 10.2 percent identifying as mixed race or other race.

In Chesterfield, only about 59 percent of census participants identified as white. Meanwhile, nearly 23 percent of the population listed themselves as Black, the largest percentage since at least 1900. The remaining 18 percent are comprised of people of color, those identifying as Asian, multi-race or other race.

Across the state, the population grew 7.9 percent to 8.6 million. Despite the increase, the growth in Virginia’s population also was the smallest since at least 1980. The reduction in growth reflects separate data showing that women in Virginia are having fewer children and that out migration from the state continues to exceed in migration.

While statewide, the majority of people still identify as white, the census data show for the first time that the majority of those under age 18 are Black, Asian and people self-identifying as multiracial or other – a clear sign that predictions that that majority-minority future of the country is on its way to becoming reality.

The bulk of Virginia’s population growth took place in the suburbs and cities in Central and Northern Virginia. Somewhat surprisingly, the seven cities in Hampton Roads gained only 50,000 in population, with most of that growth in Chesapeake, Suffolk and Virginia Beach. Four of the cities, Hampton, Newport News, Norfolk and Portsmouth, collectively registered about the same number of people as was counted in the 2010 Census.

By contrast, Petersburg was among the 71 cities and counties that added population in the past decade, another sign that community has begun turning around.

Ten of the 15 localities with the biggest percentage gains are located to the north of Richmond.

Loudoun County took first place in population growth with a whopping 35 percent increase to almost 421,000 residents. Other big gainers among places that already had more than 100,000 in population include majority-minority Prince William County and increasingly diverse Stafford County.

4 takeaways from the U.S. Census

A U.S. headcount has been carried out every decade since 1790, and this was the first one in which the non-Hispanic white population nationwide got smaller, shrinking from 196 million in 2010 to 191 million in 2020.

The data also showed that the share of the white population fell from 63.7 percent in 2010 to 57.8 percent in 2020, the lowest on record, though white people continue to be the most prevalent racial or ethnic group.

Some demographers cautioned that the white population was not shrinking as much as shifting to multiracial identities. The number of people who identified as belonging to two or more races more than tripled from 9 million people in 2010 to 33.8 million in 2020. They now account for 10 percent of the U.S. population.

People who identify as a race other than white, Black, Asian, American Indian, Native Hawaiian or Pacific Islander — either alone or in combination with one of those races — jumped to 49.9 million people, surpassing the Black population of 46.9 million people as the nation’s second-largest racial group, according to the Census Bureau.

The nation’s 7.4 percent growth rate over the decade, the smallest since the Great Depression, largely was propelled by a Hispanic boom. The Hispanic population grew by almost 25 percent over the decade. By comparison, the non-Hispanic growth rate was 4.3 percent.

Meanwhile, Asian growth jumped more than a third over the decade, rising to 24 million people in 2020.

Phoenix was the fastest-growing of the nation’s top 10 cities. It moved from sixth to fifth, trading places with Philadelphia, which is now the nation’s sixth-largest city.

The share of children in the U.S. declined because of falling birth rates, while it grew for adults, driven by aging baby boomers. Adults over age 18 made up more than three-quarters of the population in 2020, or 258.3 million people, an increase of more than 10 percent from 2010.