Spotlight on board chair of Coming To The Table RVA 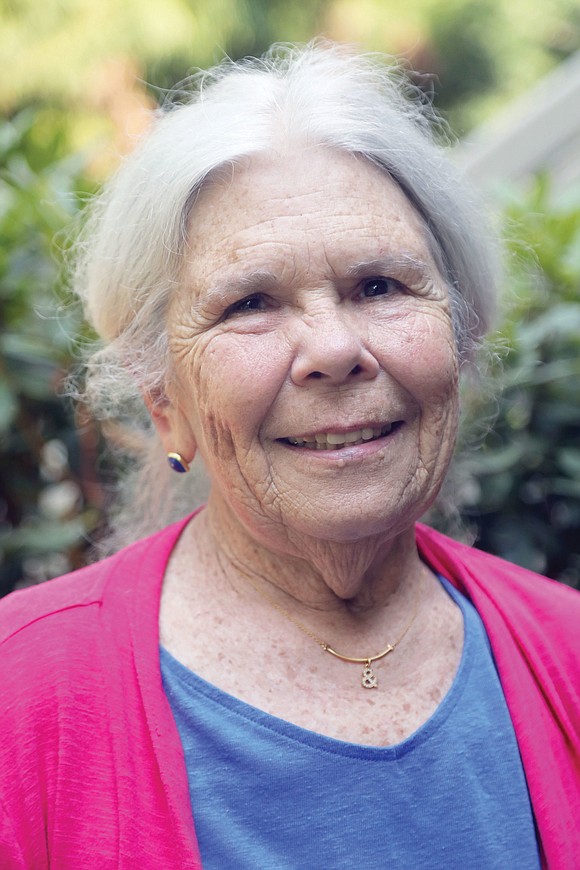 From growing up on Plantation Road in segregated Martinsville to co-founding a nonprofit striving to confront and heal the legacy of slavery and racism, the life of Martha Franck Rollins has been long, eventful and transformative — and it’s far from its final chapter.

Mrs. Rollins, 77, serves as board chair of Coming To The Table RVA, the Richmond branch of the national Coming to the Table organization that focuses on racial justice and equality. It’s just one of many roles she has taken on during a life that began immersed in a “Lost Cause” ideology.

“We seek to move our city toward justice, compassion, mercy and forgiveness, love, peace and nonviolence,” Mrs. Rollins says.

CTTT RVA was started in 2014 by Mrs. Rollins and Danita Rountree Green after several “listening lunches” that brought together their Black friends and white friends to discuss race and racism.

“We heard about the na- tional group, liked its approach of truth in history, intention- ally connecting across racial divide, taking steps to heal generational trauma and tak- ing actions to change systems and stories,” Mrs. Rollins says. “And so we began to share our stories.”

CTTT RVA has become the largest of 42 local Coming To The Table groups across the nation. It also is the only local chapter formally incorporated as a nonprofit organization. Mrs. Rollins and Ms. Green served as co-CEOs of the non- profit until earlier this year.

CTTTRVA’s work focuses on multiple pillars that “provide stability for our mission of racial healing,” according to Mrs. Rollins. Its activities include “circles,” focused on movie and book discussions, monthly dinner gatherings, as well as circles centered on reparations, food and hospitality. Special monthly events and various occasions are held throughout the year at area museums and the Library of Virginia.

In typical times, some of these events attract 200 to 400 people from the community. But with COVID-19, the circles meet via Zoom to continue their work. A second book circle is set to launch next month. Local churches and organizations have reached out to CTTT RVA to assist them in talking about race.

Mrs. Rollins sees this as evidence of a “hopeful” racial climate that has driven many white people to greater awareness and action when it comes to racial inequality.

For Mrs. Rollins, who knows first hand the journey to recognizing and fighting structural racism, it’s a different and dif- ficult path to take, but one that doesn’t have to be walked alone and will pay great personal and community dividends.

“We’d love to hear your story,” Mrs. Rollins says. “Together, we can work to heal the deep wounds of enslavement and racism.”

Meet a relationship builder and seeker of truth and racial justice, and this week’s Personality, Martha F. Rollins:

Date and place of birth: March 22 in Martinsville.

Goal of CTTT RVA: To heal wounds of the legacy of enslavement and the racism that

it spawned. The organization “values the sharing of personal, family and community stories as a powerful vehicle for uncovering history, build- ing relationships, healing wounds and inspiring action.”

Profile of CTTT RVA members: All are welcome at our table. We welcome all who wish to join CTTR RVA in honoring and committing to these principles: Respect, tolerance, honesty, truthfulness and transparency. We seek to move our city toward justice, compassion, mercy and forgiveness, love, peace and nonviolence. Our “office” is our website and all the gathering places where we met around the city before and expect to after COVID-19. Visit our website and sign up for our newsletter and various circles and events — www. comingtothetable-rva.org.

Why I am involved in CTTT RVA: Looking for our first house in Richmond in 1969, my husband Randy and I asked to see one near Byrd Park. The Realtor said, “You don’t want to live there. It’s a changing neighborhood.” I really didn’t know what he meant but I knew from his look that “a changing neighborhood” was code for describing what he thought was bad. We bought the house anyway. When we moved in on Jan. 27, 1970, the Realtor highlighted what a good house it was and warned us that crime would rise, values would drop, property would become run down and in five years, we would want to move.

That night, I remember lying in bed, hearing fearful voices. Nope, I thought, I can choose a different path. We joined the newly formed Carillon Civic Association and began meeting neighbors, making new friends, including Black friends. We worked together to become a stable neighborhood with the slogan and the lived value that “good neighbors come in all colors.” Together, the civic association founded Arts In the Park to publicize this vision since most Realtors were still in a neighborhood-flipping mindset. And I learned that our Realtor spoke a truth. It was in- deed a changing neighborhood because it changed me. Just as the Carillon neighborhood changed me through the friendships I developed, Coming To The Table RVA provides an opportunity for folks to develop deep friendships across racial barriers that still exist in large part due to housing policies set 70 years ago.

Today’s racial climate: Seems hopeful. The tragic murder of George Floyd opened white people’s eyes to what we often looked away from. Change in our ways of thinking, being and doing requires that white people see and acknowledge structural racism in the United States.

White privilege is: The advantage historically and currently given to white people in housing, jobs, education and access to capital. The cumulative result of being white impacts wealth, health and safety. The color of a white person’s skin often determines a person’s treatment in stores, by police, in schools. I can’t deny it, but by acknowledging it, I can try to use it to open doors for others.

Black Lives Matter is: A powerful and important movement waking up Americans to the inequities and injustices in our country. It is a scream against individuals and systems that deny the full humanity of African-Americans. And it is a shout of affirmation of Black success, of presence, of resilience, of souls that matter.

How I start the day: Happy, hopeful, thinking, listening and looking.

Something I love to do that most people would never imagine: Forge new trails through the woods using large clippers and a small electric chainsaw.

I am influenced by: The tapestry of people in my life, truly an “underground railroad” of people helping me leave the plantation. I have not reached the total freedom of Canada. I am still on a journey of learning new ways of thinking, being and doing and still helped on my way by numerous people, books and experiences.

Books that influenced me the most: “Stamped from the Beginning” and “How to Be an Antiracist” by Ibram X. Kendi, and “The Half Has Never Been Told: Slavery and the Making of American Capitalism” by Edward E. Baptist.

My next goal: To press on. To listen carefully, look intently, love deeply and live fully. Make new friends. Make thoughtful and courageous decisions. Strengthen the CTTT RVA board by deepening relationships, creating board circles and adding new members.