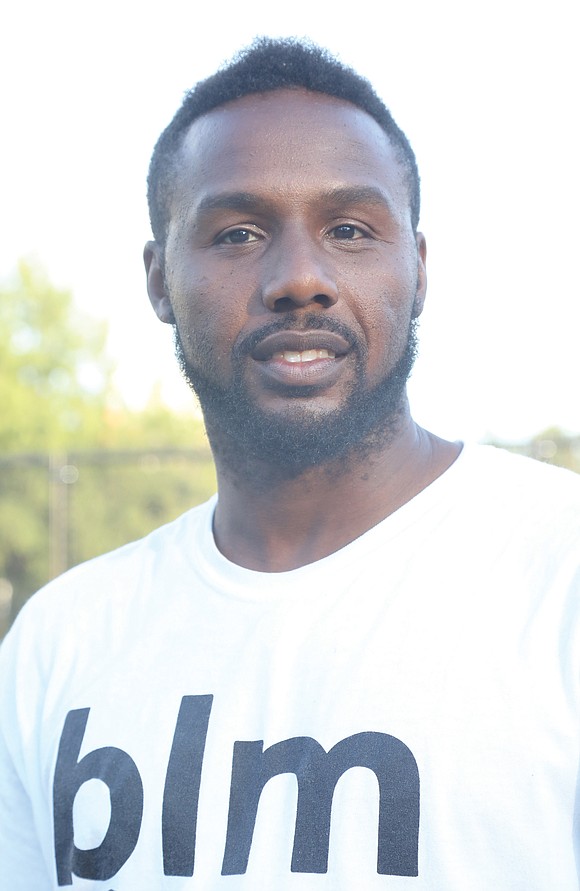 For many, the removal of the statue of Confederate Gen. Robert E. Lee from the pedestal where it stood for more than a century was a symbolic moment that could herald further progress and change.

For Lawrence E. West Jr., founder of Black Lives Matter RVA, the removal was something more substantial and critical.

Having been part of interviews with global news outlets about the statue coming down, and standing among the cheers and public celebration when it finally was brought down Sept. 8, Mr. West sees the power of the event as one that can be used to mobilize the community around other issues.

“Regardless of if it’s symbolism or not, that’s important for anybody’s issue to have the world look upon them and say, ‘OK, I hear your plight. Let me help join the fight,’ ” Mr. West says.

BLM RVA came into existence as a result of increased interest in issues that Mr. West seeks to build upon. The group was formed during the protests against police brutality and for racial equality that began in Richmond in mid-2020 following the murder of George Floyd by police in Minneapolis. The group was known as “The Kitchen,” an occupation that formed north of the Lee statue as a community resource.

In the time since, the group has grown to about 47 registered members and many more unregistered, and has solidified its guiding principles of community advocacy, political action and readiness to protest and pushback against social oppression when it appears.

“Our mission was born out of refusal to disband or leave our community space and the refusal of the administration to hear our demands,” Mr. West says.

The Washington, D.C., native describes BLM RVA as a “community organization with a front line attitude, with the goal of making a better Richmond.”

BLM RVA’s main focus currently is its Jobs Not Jail diversion program, which seeks to aid those in court-appointed community service with vocational and entrepreneurial training. To facilitate this, the group is working to make connections with area businesses and localities to help with funding and implementation.

The group also is looking to take on an advisory role for local government bodies as a way to guide those in power to move away “from criminalizing poverty and mental health issues to creating greater access to health and wealth building,” as Mr. West puts it.

To achieve these goals, the group has partnered with or has members as part of groups that include the Marcus Alert Stakeholders, Path to Equity, the Department of Public Works, the Richmond City Council’s Ethics and Reform Commission and more. And to hear Mr. West’s testimony, they’re already making headway.

“There’s so many things that we are operating and we’re doing right now that challenge this system as it is,” says Mr. West. He emphasized BLM RVA’s work in building a better understanding of the systems that govern so many lives.

What BLM RVA finds and learns in the course of its efforts will be shared among the Richmond community through various public discussions, the latest of which is a Marcus Alert community forum planned for 6 to 7:30 p.m. Wednesday, Sept. 22, and 1 to 2:30 p.m. Saturday, Sept. 25. Details about the virtual events are available at www.rva. gov/marcus-alert.

Mr. West sees the steps made so far by BLM RVA as ones that will pay dividends for the future of Richmond.

“We’re not on the outside looking in. We’ve just got access to the door,” Mr. West says. “We’re walking through the threshold and we’re not one-track minded. We’re really trying to gather information so that we create sustainable solutions.”

Meet a local leader in the renewed fight for racial justice and this week’s Personality, Lawrence E. West Jr.:

Date and place of birth: June 3 in Washington, D.C.

Family: Divorced, with two children, a boy and a girl.

BLM is: A call to action!

Total number of BLM chapters: A lot. Some affiliated directly, some not.

BLM RVA is: A community organization with a front line attitude, with the goal of making a better Richmond.

When and why BLM RVA was founded: BLM RVA was born out of the movement during the summer of 2020. We were established as an official organization later in the year, with the intent of engaging and advocating for the community beyond Marcus-David Peters Circle.

BLM RVA’s mission: 1) Advocate for the social needs of our people. 2) Stand against police brutality and systemic oppression. 3) Stay ahead of ever-changing policies and laws with politicalaction. 4) Stay ready to protest injustices.

BLM RVA and the Robert E. Lee statue: The occupation was originally established under the name “The Kitchen,” an area north of the Robert E. Lee traffic circle, to help serve anyone and everyone. People who frequented became known as the occupiers. And our mission was born out of refusal to disband or leave our community space and the refusal of the administration to hear our demands.

The role protesters played in removal of Lee statue: Our involvement in bringing down the Robert E. Lee statue was critical. This is one of the only monuments to face opposition to its removal. Without community, it would have been swept under the rug.

White supremacy and white privilege: We have been placed under continuous scrutiny because of long-standing oppressive ideals. The people known locally as Trumpers called us criminals even though their leader, Mike Dickinson, himself had been convicted of crimes. The neighbors called the police on us almost daily for a number of legal activities with the intent of militarizing the police.

How BLM RVA envisions the green space created by the removal of the statue: We imagine the fence around Marcus-David Peters Circle gone, basketball courts, gardening area, cookout area and community seating.

No. 1 goal or project of BLM RVA: Diversion program; we recently received approval from Richmond Commonwealth’s Attorney Colette W. McEachin to be involved in court-appointed community service as Tier 1 implementation of our Jobs Not Jail diversion program. We are looking to partner with neighboring localities and businesses to implement and fund entrepreneurship training and vocational training.

Plans for goals to be accomplished: We hope to have businesses provide scholarships to individuals normally considered to be a risk to society to foster entrepreneurship and vocational training. We also hope to be granted access to local government bodies and work with them to facilitate a transition from criminalizing poverty and mental health issues to creating greater access to health and wealth building. Through initiatives and collaborations such as Surveying Gun Violence with Rhonda Gilmer, the Department of Justice and the Marcus Alert stakeholders.

Lessons learned during pandemic by BLM RVA: People are people even if they are separated by class or race. Their needs are the same. We cannot glorify or covet each other’s items but celebrate each other’s successes.

Ways to be involved with BLM RVA: Visit blmrva.com and sign up for local participation or become a member. Or follow us on Instagram@blmrva.

How I start the day: What do I need to get accomplished today and what is my first priority?

Three words that best describe me: Understanding, driven and wild.

How I unwind: Have a night out on the town, or go out of town.

What I am learning about myself during the pandemic: I love giving.

Something I love to do that most people would never imagine: Go out and party.

Quote that I am most inspired by: “Skill is better than talent.” — Will Smith

At the top of my “to-do” list: Implement Jobs not Jail, our diversion program.

Person who influenced me the most: My dad.

Book that influenced me the most: I am in the beginning stages of writing my own book.

Next goal: Host community discussions surrounding how to better implement the change we want to see every day.