On the way out

Gov. Ralph S. Northam orders removal of 40-foot granite pedestal that held Confederate Robert E. Lee’s statue on Monument Avenue, and for the land to be turned over to the city 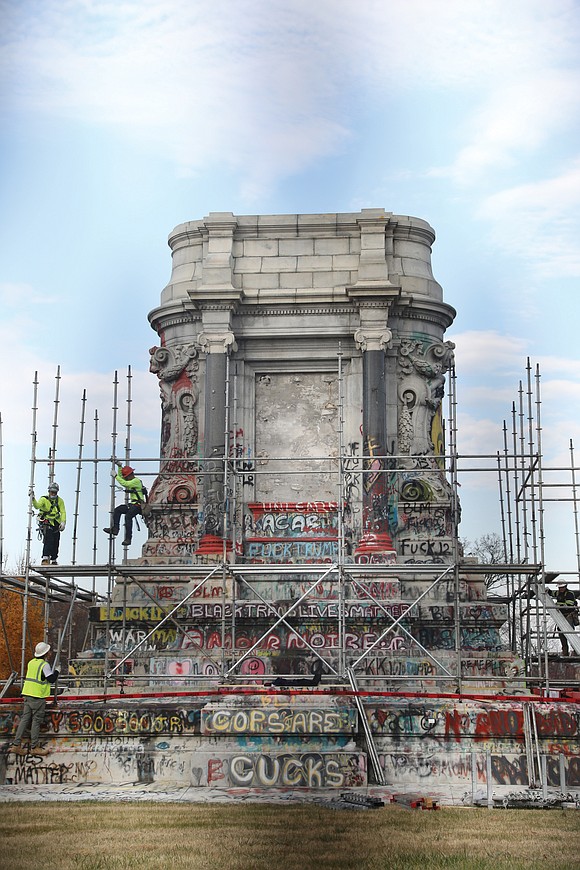 When the giant monument of Confederate Gen. Robert E. Lee went up 131 years ago, fiery Richmond Planet editor John Mitchell Jr. described it as monument that would hand down to future generations “a legacy of treason and blood.”

Suddenly, that legacy that seemed a permanent fixture of the Richmond landscape is about to disappear, leaving an empty grassy circle, 200 feet in diameter, at the intersection of Monument and Allen avenues.

Since Monday, workers have put scaffolding around the 40-foot tall granite base that once held the 21-foot tall statue of Gen. Lee that was taken down in early September.

For the next few weeks, the crew organized by Team Henry Enterprises — the same Black-owned construction firm that took down the statue — will be engaged in the painstaking work of dismantling the last vestige of this monument to white supremacy and carting to it storage.

“It’s about time,” said Richmond artist and clothing designer Brandon Fountain, who has come to the site almost daily since June 2020.

At that time, the site became a regional epicenter of protest against racial injustice and police brutality following the Minneapolis Police murder of George Floyd in late May 2020.

Mr. Fountain had created a garden at the site before the state fenced off the area to keep people out, and he sees the pedestal’s removal as an opportunity to create “an inclusive space that is welcoming to all.”

The base is still covered in colorful artwork condemning racism and police and that transformed the circle into an activist centerpiece. An impressed New York Times ranked the pedestal as the most influential piece of American protest art since World War II.

It was expected to remain in place.

Gov. Ralph S. Northam ordered the statue removed in 2020, but had to wait 16 months to get it done until after a Virginia Supreme Court ruling in early September cleared the legal challenges. Gov. Northam said at the time that the pedestal would remain, its future to be determined by a community-driven effort to reimagine Monument Avenue.

The Virginia Museum of Fine Arts is now in the early stages of that process, using $1 million in state funding.

On Sunday, the governor reversed himself about the pedestal remaining after Richmond Mayor Levar M. Stoney requested its removal and that the land be turned over to the City of Richmond.

“This land is in the middle of Richmond,” the governor stated in spelling out his revamped position, “and Richmonders will determine the future of this space. The Commonwealth will remove the pedestal” and then begin the process of transferring the deed to the property to the city.

Jim Nolan, the mayor’s press secretary, stated the mayor “believes Richmond deserves a clean slate” as part of the process of bringing change to that site and the rest of Monument Avenue.

The city took down four other Confederate statues it owned on Monument Avenue, and City Council has authorized removal of the those statues’ pedestals as well.

Among the reasons for the removal appears to have been concern that the incoming administration of Republican Gov.-elect Glenn A. Youngkin and the new Republican majority in the House of Delegates might seek to sandblast the graffiti off the base and restore the statue.

In recent years, Republicans have energetically led the charge to keep statues and monuments supportive of the traitorous Con- federate effort to destroy the union to maintain slavery.

Though Gov. Northam denied that was a consideration, there was hint of such concern in a statement from his spokeswoman Alena Yarmosky: “It was important to us that we do it now and before we leave office.”

The ACLU of Virginia was among those disappointed with the governor’s decision to order the pedestal’s removal without any public input.

The First Amendment watchdog group criticized the governor for making a secret deal on a pedestal “that was reclaimed by the community as a monument to racial justice” and on which the community “deserved to have a say.”

Portnoy Johnson, one of the handful of people who gathered Monday to watch the work, called the removal “bittersweet.” She said the statue had become a symbol of the “pain, emotion and sacrifice” of those who had been part of the transformation.

Lawrence West, a founder of Black Lives Matter RVA whose members had occupied the circle, held concerts and distributed food, said, “I’ve been saying for some time that it should come down.”

Mr. West said that as long as the pedestal stood, it was a potential battleground for those in favor of the Lee statue re- maining and those who wanted it removed.

With it gone, he said, “we can begin to find common ground.”