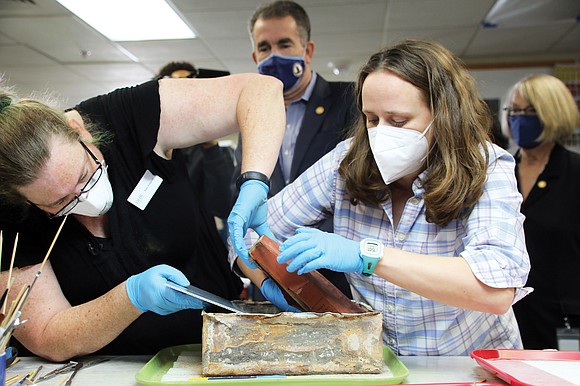 Kate Ridgway, left, state archaeological conservator with the state Department of Historic Resources, helps Sara Donovan, a conservator with the University of Virginia’s Special Collections, lift items on Wednesday from the time capsule that was buried in the Lee monument pedestal for more than 130 years. Gov. Ralph S. Northam, center, was asked to help remove the lid of the sealed lead box, where an old coin, three books and an envelope containing a photo with the text “James Netherwood, The Master Stone Mason” were found. Photo by Regina H. Boone

A rust-colored 1875 almanac, a cloth envelope and a silver coin were found Wednesday in a time capsule that had been buried beneath a towering statue of Confederate Gen. Robert E. Lee on Monument Avenue for more than 130 years.

Another book, tattered with a pink cover, appeared to be an 1889 edition of “The Huguenot Lovers: A Tale of the Old Dominion” by Collinson Pierrepont Edwards Burgwyn. There also appeared to a pamphlet of some kind.

There were three books total, all of which appeared to be water damaged. Gov. Ralph S. Northam said the books, once dry, will shed light on what people were thinking here in the late 19th century.

“This is an important day for the history of Richmond and Virginia,” Gov. Northam said. “We have 402 years of history. And just to see what was going on at that stage of our history, I think, is really important.”

A newspaper article from 1887 suggested that the time capsule would contain Civil War memorabilia and a “picture of Lincoln lying in his coffin.”

An envelope found in the time capsule did contain a photograph with the text “James Netherwood, The Master Stone Mason” on the back.

Records from the Library of Virginia also suggested that 37 Richmond residents, organizations and businesses contributed about 60 objects to the capsule, many of which are believed to be related to the Confederacy.

Besides there being far fewer objects, the capsules’ dimensions were smaller than expected. The capsule, which is about the size of a large shoe box, was also made of lead, not the copper that state officials believed it would be.

The discrepancy between what was expected to be in the capsule and what was found led some to speculate that another capsule may still be within the pedestal, not yet discovered.

“We confirmed that it’s not the one we thought it was. So that means a copper one is probably still in the foundation,” said Dale Brumfield, a local author, journalist and historian.

He pointed to the presence of the book written by Mr. Burgwyn, who designed the roundabout where the Lee statue was erected in 1890, as a sign the capsule was an official, intended part of the monument’s construction.

“This is some kind of halfway point celebration. It doesn’t appear to be something someone slipped in,” Mr. Brumfield said. “We’re halfway there.”

For five hours, conservators at the state Department of Historic Resources on KensingtonAvenue toiled to open the top of the small lead box that was finally found. They worked diligently to avoid damaging the items. The combination of corrosion and mortar made opening the capsule that much more difficult.

Work accelerated when it became clear that condensation had developed inside the small box, putting the items inside at risk of further damage.

However, for those who finally found the box, the fact that it was recovered at all was a success.

“It’s a total relief,” said Devon Henry, president and chief executive officer of Team Henry Enterprises, which has handled the removal of the six-story bronze statue and its granite pedestal.

“To have actually found it in the condition we found it without damaging it, right? That’s a big plus,” Mr. Henry said.

The statue, long viewed as a monument to the traitorous Lost Cause and white supremacy, was taken down in September, more than a year after Gov. Northam ordered its removal in the wake of daily protests over racial injustice and police brutality that erupted in Richmond and across the country after the May 2020 police murder of George Floyd in Minneapolis.

The 40-foot pedestal where the enormous bronze statue of Confederate Robert E. Lee on horseback once stood on Monument Avenue was finally cleared away Wednesday afternoon by crews working for 14 days. The Lee statue was removed in September. The site is to be cleaned and the ground leveled. The state is expected to turn ownership of the land over to the City of Richmond after Christmas.

The final stone blocks of the pedestal came down on Wednesday afternoon.

The capsule was found Dec. 18 embedded in a 1,500-pound granite block, located about 20 feet off the ground in the pedestal’s main section.

The day after the statue was removed, a team spent more than 12 hours searching for the time capsule at the base of the 40-foot-tall pedestal but were unable to locate it.

Those who searched for it in September believed at the time that it was tucked inside or under a cornerstone of the pedestal.

Late last week, workers lowered the large piece of granite containing the box to the ground, strapped it to a forklift and drove it down Monument Avenue to the state Department of Historic Resources, where it was dislodged from the granite and X-rayed to verify its contents.

The Lee statue was one of five Confederate statues that stood for more than a century along Monument Avenue. It was the only one that was owned by the state. The other four, owned by the city, were removed last summer under emergency order of Mayor Levar M. Stoney after protesters had pulled the statue of Confederate President Jefferson Davis off his perch. Richmond City Council ratified the mayor’s orders on July 1, 2020.